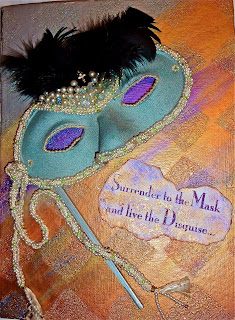 I belonged to a very creative club on the web, mostly women from the USA.  I think, in fact, I was the only Canadian member.  We had great fun, with altered book round robins.  The particular book I created, and am showing you here, was sent to nine different women who each contributed as many altered pages as they wished.  Before the book was sent out, the originating member would establish a theme and do the first few pages herself.  The book was then sent on to the next person on the list.  Each member was able to keep it for three weeks, create her pages, send it on .... and so it went.  About nine months later you would receive your original book back completed by other members with their own take on the theme and their own bent on creativity.  All the time we would keep in touch via our club headquarters on the web, posting tid bits and photos of what we were up to.  Fabulous Fun!

The theme of this book was Venice set in the 1980's. I will set the scene.  Picture this.  A registered letter is delivered to my house.  It's from a dear old friend from my days of traveling in Europe.  He is now the head of archeology at the university of Rome.  He is organizing an archeological dig in Venice, in a part of the old Doges Palace.  Knowing I have always been interested in history and archeology, I am invited to join them.  Naturally, I jump at the chance and am off the Venice to meet Michaele and his team.  I will share with you an excerpt of the story:-

"Details of the dig were sketchy.  A residence attached to the Doge's palace had gone up for private sale and was purchased by friends of Michaele.  While installing a new water system in the old underground kitchens, some interesting artifacts had been discovered.  They wanted them investigated. ........

We dug, day after day, underground in the cold, dark and damp.  Water slowly dripped down the walls - echoeing through the arches of the old structure.  The energy was incredible.

One morning, shortly after work began, I came across a fragment of material.  I called Michaele and he took over.  After hours of careful excavation with dentist type picks and shall brushes, objects of great interest began to appear.  I gasped, holding by breath, unable for just a moment to breath.

We had uncovered a carnival mask and long cape - or the fragments of one.  Later, after testing, the material was deemed to be hand woven black silk circa 13th century. The remains of the stones, which lay here and there - hand cut Russian crystals and pearls, also from the same period.  The few other stones unearthed stopped our hearts.  Breathtakingly beautiful black onyx oval stones inlaid with silver crosses lay before us.  In their silence, they screamed at us.  Michaele and I stared, first at the stones, then at each other.   ..... could it possibly be????

All those years ago, on the ship from New York to Athens, Michaele had told me the "Legend of the Mask".  In later years, after some research he believed this legend to hold at least some authenticity.  Over the years, Michaele had spoken with many bands of Gypsies and in one particular instance, the Gypsy Queen had sat quietly with him around the night fire and told him her version of the legend.

Our last evening in Venice, Michaele and I sat alone in a lovely Italian restaurant overlooking the grand canal discussing our long friendship and recent adventure.  At the end of the evening, he presented me with a beautifully wrapped gift.  My heart quickened again.  The energy eminating from the box was making my hands vibrate.  Inside, lay the old documented story the Gypsy Queen had told him by the fire.  A blue velvet bag contained some of the stones we had uncovered.  A hand written note from Michaele counseled me ... "Handle them with care and respect, they DO contain the magic."  His eyes sparked with delight.  I smiled quietly.

The mask I constructed on the front of this book contains some of 'the stones'.  The document in the envelope is the original. 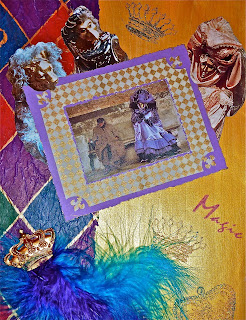 The mask I created on the front of the book comes off.  It is held on by velcro.  The theory is if you take the mask off, hold it up to your eyes and say some magic words which I have instructions for in the book, you will be transported to 'anywhere', and can be anyone you wish to become.  On that basis, members of the group created their altered pages with paint, drawings, images, stamps and anything else they could think of.  This process is one of my favorites.  I can let my imagination run wild.  It's amazing what 'comes out'.

"There is vitality, a life force, an energy, a quickening, that is translated through you into action, and because there is only one of you in all time, this expression is unique.  And if you block it, it will never exist through any other medium and will be lost." 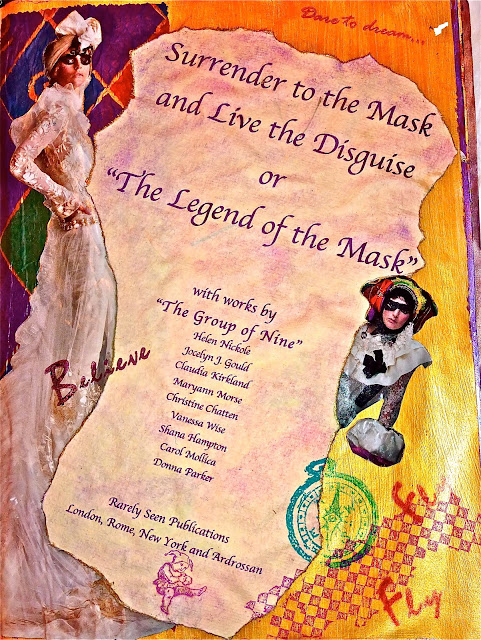 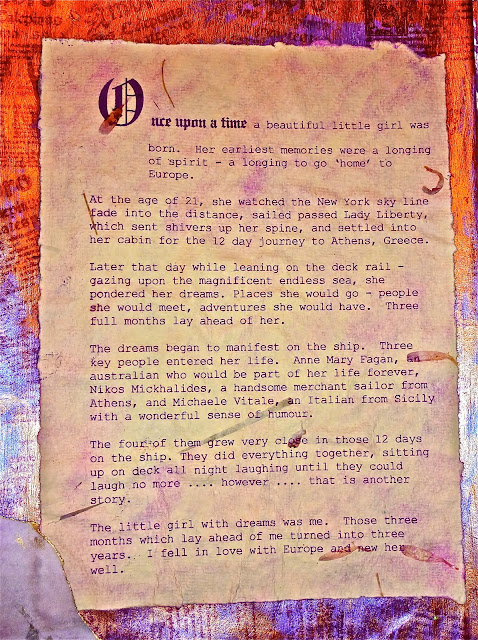 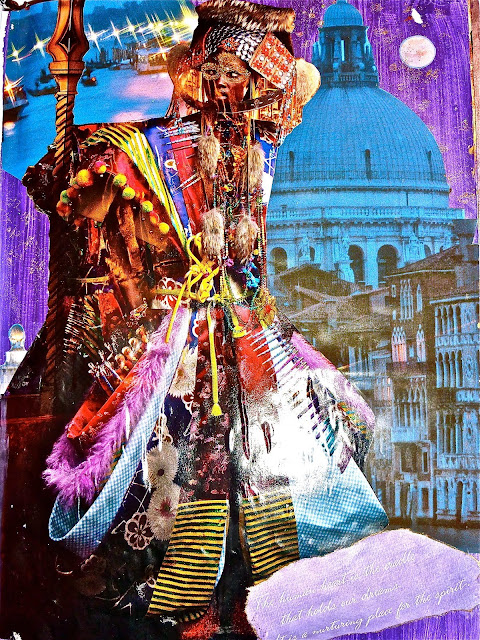 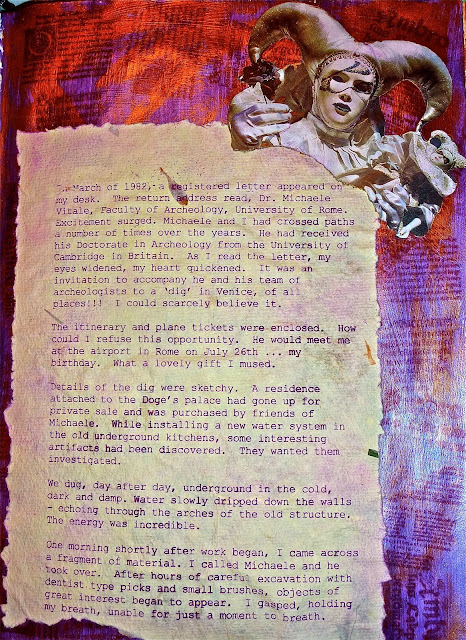 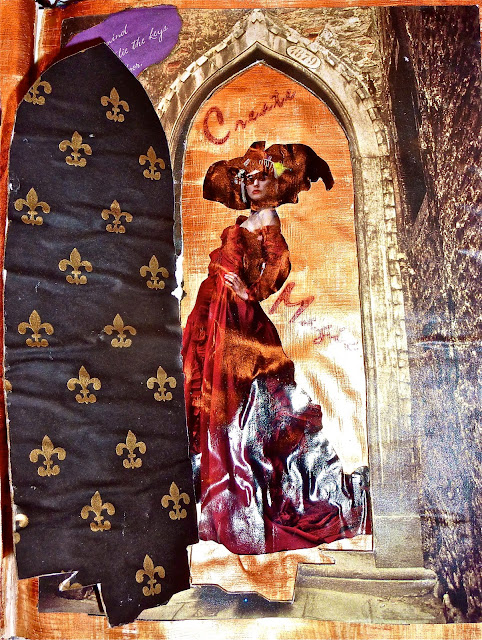 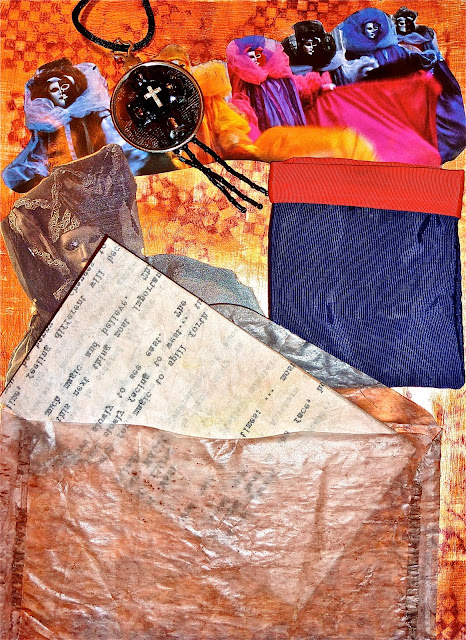 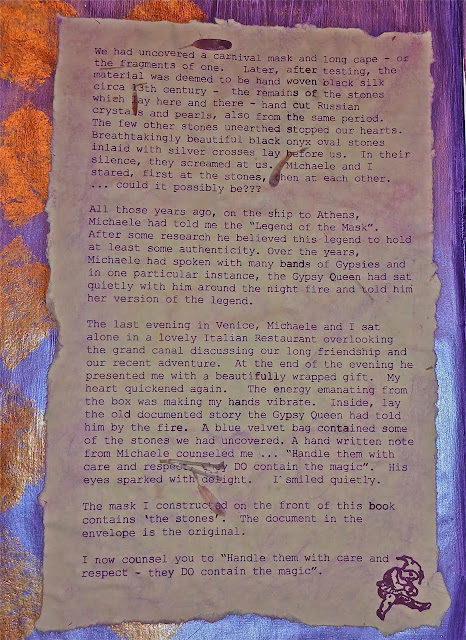 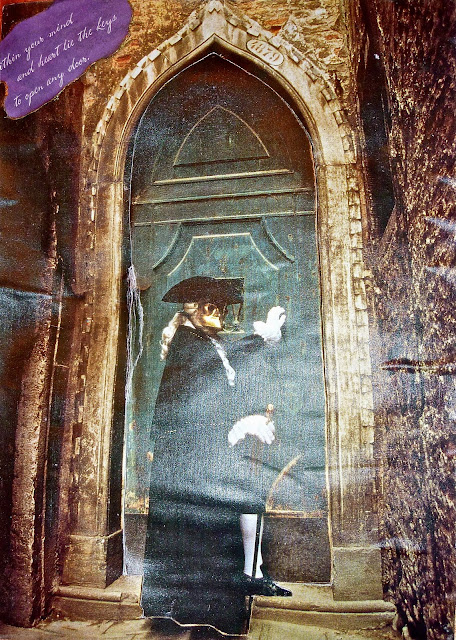