* The Camel Who LOVED me

"How did you luck out?, I whispered in his ear after he had gracefully and gently lowered himself to the ground allowing me to disembark with my dignity in tact.

Have you ever looked into a camels eyes - up close and personal.  Notice
their eyelashes?  WOW.  And that's with no mascara.  No one said life was going to be fair, but come on ... a girl just doesn't have a chance!  I use the 'double ended' mascara -- first you coat your lashes with a thickener - then plaster them with the colour.  Still -- not even close! 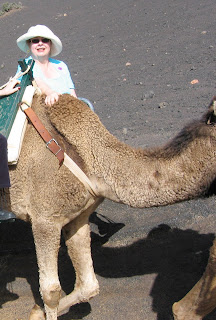 The camel trek was much more than I expected. I didn't want it to
end, I wanted to travel this way forever,  I wanted a traditional camel saddle complete with persian rugs and tassels,  I wanted to cross the desert with my bedouin tribe ..... Who were all these other people anyway ..... Where was my tribe??  I buried my fingers deep into the beautiful deep luxurious hair on his neck and burned the memory into my brain.

Meanwhile the camel next in line was falling in love ..... with ME!  I felt the nuzzling begin on my shoulder and slowly move down my back.  Interesting throatie soft cooing noises began.  They were gentle amd soothing.  I relaxed - it was better than meditation.  I turned and looked into his eyes.  We fell in love.  The ritual carried on until the trek was over.   I spoke softly to him, telling him how handsome he was along with other ego boosting tidbits men seem to enjoy. The people on the camel behind us kept laughing and calling out, "There's going to be a Wed-ding".  I was honoured and teasingly held my head high.  No one elses camel was courting and wooing.  Besides, I hadn't been courted or wooed in eons - it was very enjoyable!  The woman next me leaned in close to snap a photo - after all, it was a Kodak moment.  Abdul (oh, for goodness sake, I had to name him!) lurched away from me swinging his head angrily toward the camera.  He bared his teeth.  He hissed, screeched and would have spit at her had it not been for the muzzle.    She backed off.  Believe me, he wasn't kidding. Quieting himself and regaining his composure, he returned to my back, gently nuzzling and cooing.  I was in heaven!  Since then, I have dubbed him Abdul-Badi, an old Arabian name meaning Servant of the Incomparable. This seemed fitting ... lol ... I'm sure Abdul would approve.

Observing camels' feet was a thrill for me.  Talk about built for the job!  Absolute perfection.  They take the weight superbly, spreading out slightly as the foot first hits the ground, then gently settling down into the earth.  Such grace.  I couldn't take my eyes off them.  The rhythm of a camel is intoxicating.  I closed my eyes and settled in, completely relaxed, completely at home.  My mind drifted to tents and sand doons, open fires under star filled skies, tribal persian rugs - leaning on our camel saddles drinking tea. From the tangines (I've always wanted one of those) drifted the delightful smells of lamb stew and spices.  Pita bread cooking on hot rocks. Ah yes ..... Sigh ..... 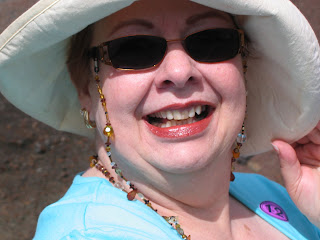 I felt blissful.  One more thing off my gondola list, although as I said, I definitely wanted more.  Perhaps the big camel auction in the outskirts of Buraydah in Al-Qassim in Saudi, and a camel of my own needs to be added to my list. Are women allowed to go there and buy a camel?  Note to self:  check it out.  Alternative:  Pushkar in Rajasthan, India - a huge camel fair and auction held yearly. 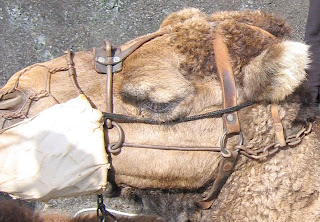 "Hey Babe, let me get that muzzle off of you and we'll blow this popcorn stand."

Photos taken during a trek in Lanzarote, Canary Islands, 2009.


Note to readers:  "Gondola List" is my interpretation of 'bucket list' or 'to do before I die' list. Gondola is one of my favorite words.  It works for me.


"Hold fast to dreams for if dreams die, life is a broken winged bird that cannot fly ...." Langston Hughes