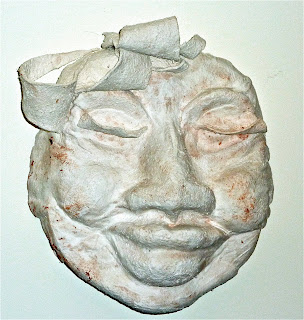 I was astonished when Mama Moon began to appear!  I had no experience in sculpture.  While still in Alberta a friend of mind invited me over to make a mask.  It sounded like fun.

I was presented with a lovely lump of red clay.  Just the colour delighted me.  "What do I do with it?, I queried.  "Knead it, and make it into a ball, then make a face."  The knead and ball part sounded possible --- the face part, not so much.  "What are you going to make?", my friend inquired.  "Don't know, how about you?"  "I'm going to sculpt a native indian."  The fact she actually had an idea impressed me.  My idea file was empty.

We put music on and went to work.  As I began to enjoy the feel of the clay, my hands went to work and a face began to appear.  It became rounder.  Her cheeks took on a life of their own, her nose widened and her lips became voluptuous.  "She's Black.", I announced.  I was stunned.  The face simply kept morphing out of the clay.  She began to smile at me.  Her face took on character.  I giggled and laughed out loud with delight.  There was no way any of this was in my head so where was it coming from?  "It's Mama Moon!" I squealed as I finished her long eyelashes.  I must say, my critic was very quiet that night.  I truly felt as though I had absolutely nothing to do with this creation.  It was a true gift from the Universe.  She was sacred.

Now, four years later, I was happy to find her in good condition in my storage unit.  She was disgruntled at being in a box for so long.  I brought her home.  She's hanging on my wall and causes me amusement every day.  Mama Moon is talking to me.  She's speaking out every day.  I'm getting dirty looks.  "I want to be decorated.  I demand to be painted.  I'm worth it.  I'm beautiful."  Mama does deserve some decoration, however, now I'm intimidated.  I might ruin this gift which was given to me.  I don't know where to start.  I don't know what colours to use.  I don't know what colour her eyes are.  What will I do with those long eyelashes which she adores so much.  So many questions, so much fear!   A spiritual teacher of mine once told me, "If you say you don't know, you don't."  I know that to be true.  However .......  such is life.  Scared and stuck when it comes to Mama Moon.  The situation is symbolic.  Any advise?

"That the universe was formed by a fortuitous concourse of atoms, I will no more believe than the accidental jumbling of the alphabet would fall into a most ingenious treatise of philosophy."  Johnathan Swift