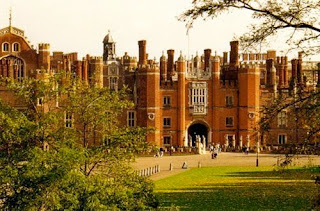 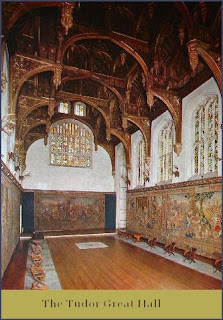 In my dreams, I fly!  It's the most extraordinary sensation. Infinite freedom. I fly in some interesting places.  Never outside.  Not yet, anyway.  Mostly European Cathedrals and Palaces, through and around glorious Gothic arches, Greek columns, or Tudor hammer beams.  In my dreams, ceilings are the most incredible places to explore. I recognize few of the actual ceilings, although they all seem familiar.   Repeatedly however, I fly in the Great Hall of Hampton Court.  Oddly enough, Hampton Court was one of my love affairs.  While I lived in London, I would catch the train and spend the day by the Thames in one of Henry's VIII's favorite places.  I felt at home there, on the grounds and in the palace. I remember the great kitchens. They would have been  'state of the art' in the 1500's.   Huge with every modern convenience.  Henry had them constructed with facilities capable of feeding 1000 people.  Now, that's what I call a party!  At the time, I was fascinated with the hammer-beam ceiling in the great hall.  It's mighty impressive.  Now I fly there regularly.

I'm never in the hall alone.  Mesmerized people watch me from below.  They all want to join me.  They beg me to show them how.  "It's so easy, come on up." --  I call out as I beckon them to join me.  No one is able to 'lift off' - so I always land and give a demonstration of how simple it is to obtain flight.  I push off with the greatest of ease and expect everyone to be following me.  After all, I have shown them exactly how it's done.  It can't be that difficult.

Then I am up in the beams again - flying free.  I look down.  Everyone is still grounded!  I'm always surprised no one can seem to get the knack of something so simple.  I laugh, and fly, and push off the beams with my arms, swooping and diving.  It really is wonderful.  It's surprising to wake up and find myself tied to the earth by such an annoying little physics law which Newton called 'the law of gravity'.

What do I remember about the great hall?  The ceiling in the mid 1500's was out of style, hammer beams were thought to be old fashioned. Henry and his court never ate there.  I believe lesser courtiers and servants took their meals there.  With over 200 servants, and many lesser courtiers, it took two sittings.  The hall itself never had a fireplace.  No one has ever really figured out how it was heated.  There is a stone slab on the floor at one end which may indicate there were open fires for heat.

The ceiling itself is said to be made of Irish Oak, which has insect repelling properties - thus no spider webs ever plagued the cleaners of the great house.  In all probability, when first built, the beams would have been brightly painted and accented with gold leaf.  I, personally, have never seen any remanent of decoration as I am flying ... lol.


"Within all of us is a varying amount of space lint and star dust, the residue from our creation.  Most are too busy to notice it, and it is stronger in some than in others.  It is strongest in those of us who fly and is responsible for an unconscious, subtle desire to slip into some wings and try for the elusive boundaries of our origin."  ~ K.O. Eckland


WHAT MAKES MY HEART SING 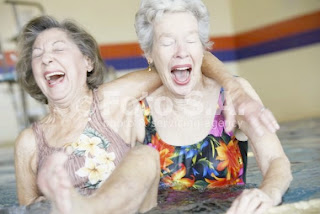 LAUGHING.  What could possible make us feel better than a good laugh, either alone or better still, with friends.  In my day, I've laughed 'til I cried, laughed 'til tears ran down my cheeks, and laughed 'til I peed my pants.  I've enjoyed it all.  The act itself is very therapeutic, cathartic, and can sometimes leave me wonderfully exhausted, lying in some unlikely place, holding my stomach, gasping for a breath!!  Laughing takes the stress out of my body and leaves me feeling very peaceful.  It's a good thing.  It's a blessing.  Laughing makes my heart sing!
Posted by Unknown at 4:44 AM