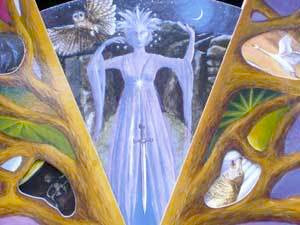 A Time of Magic

In many cultures, customs practiced at Solstice go back to pre-Christian times. Many involve divination--foretelling the future at a magic time: the season turning of solstice.
In Russia, there's a Solstice divination that involves candles. A girl would sit in a darkened room, with two lighted candles and two mirrors, pointed so that one reflects the candlelight into the other.The viewer would seek the seventh reflection, then look until her future would be seen.
The early Germans built a stone altar to Hertha, or Bertha, goddess of domesticity and the home, during winter solstice. With a fire of fir boughs stoked on the altar, Hertha was able to descend through the smoke and guide those who were wise in Saga lore to foretell the fortunes of those at the feast.
In Spain, there's an old custom that is a holdover from Roman days. The urn of fate is a large bowl containing slips of paper on which are written all the names of those at a family get-together. The slips of paper are drawn out two at a time. Those whose names are so joined are to be devoted friends for the year. Apparently, there's often a little finagling to help matchmaking along, as well.
In Scandinavia, some families place all their shoes together, as this will cause them to live in harmony throughout the year.
And in many, many cultures, it's considered bad luck for a fire or a candle to go out on Solstice. So keep those candles burning! 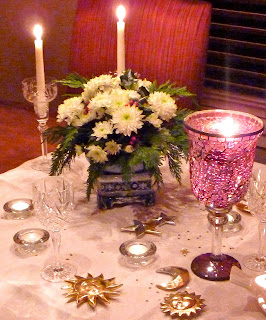 David, Jean and I celebrated Solstice this evening.  Jean cast a circle in Wicca tradition as we welcomed the spirits of the North, South, East and West to our table.  We feasted on a sumptuous green salad loaded with nuts and seeds, dried cranberries, corn, cucumbers and tomatoes. Fresh crusty brown herb bread. Fresh fruit salad with whipped cream and lastly a small fruit tart with sweet custard.  Winter Solstice honours the longest, darkest day of the year. Tomorrow, the light will begin to come, little by little as we inch our way to spring.  The fresh salad, nuts, and fruit represent the newness of spring and what we have to look forward to.  These foods represent hope.

December 21st signifies the first day of winter. It is a time to withdraw and rest within ourselves, wrapped in the safety of the darkness and the coolness of the season.  It's about sitting by the fire, perhaps with friends, perhaps alone.  It's a time of rest and renewal, a time to ready ourselves for the future, for the newness and the brightness of the light to come. A time to ponder and ask our what our next step will be. A time to plan before we begin new projects. It's a time of rest after the bringing in of the harvest and before the work of planting.

We spent a warm evening together, enjoying the food, enjoying each others company, enjoying the beautiful table setting, the candles and the flowers.  Resting in the moment.

"So the shortest day came, and the year died,
And everywhere down the centuries of the snow-white world
Came people singing, dancing,
To drive the dark away.
They lighted candles in the winter trees;
They hung their homes with evergreen;
They burned beseeching fires all night long
To keep the year alive,
And when the new year's sunshine blazed awake
They shouted, reveling.
Through all the frosty ages you can hear them
Echoing behind us - Listen!!
All the long echoes sing the same delight,
This shortest day,
As promise wakens in the sleeping land:
They carol, fest, give thanks,
And dearly love their friends,
And hope for peace.
And so do we, here, now,
This year and every year.
Welcome Yule!!"
-   Susan Cooper, The Shortest Day
Posted by Unknown at 12:10 AM