* Art Class and a little History 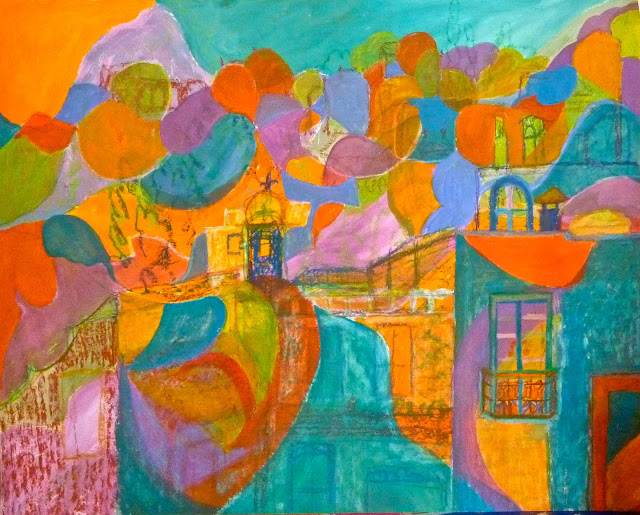 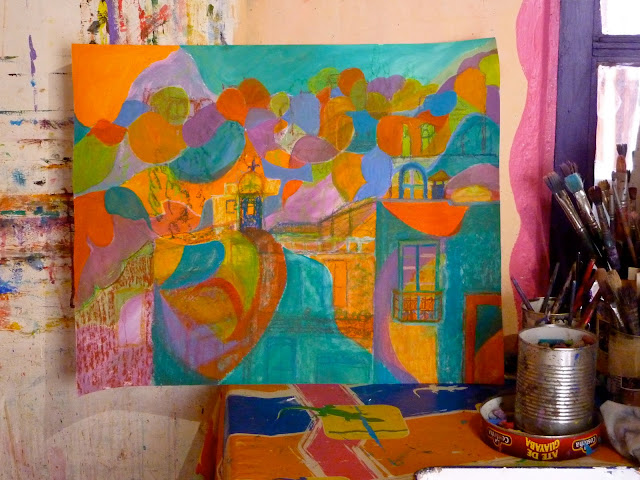 Now!  Can you see anything is this?  Well, I am beginning to figure it out.  As I said before (I think) I threw maligros, drew intuitive lines around them, painted in the colours.  The shapes reminded me of the hills of San Miguel and how the houses sort of fit into those hills.  I went to my terrace and began to draw what I could see.  It got complicated and I freaked, became overwhelmed and stopped dead in my tracks.  I took it to Nina today, expecting her to say, "It's a good try, however, perhaps we should start over."  Instead she raved about it, said I was on the right track and told me the piece was going to be fabulous.  I was stunned.  I told her I was overwhelmed and had to stop from the shear lack of not knowing what to do next.  She got out a book.  Showed me the progression of the 'artists process'.  You begin with an idea.  You are pumped.  You play and play and are in the flow.  Suddenly, you don't have a clue what you are doing.  This is called the incubation period.  It's a time, when you may stop for awhile, play and see what happens for awhile, or various other options.  When the incubation period is over, you have a 'light bulb' moment, when all becomes clear about what you should be doing next.  At that time, you are able to get back into 'process', or into the 'flow' and complete what you are doing.  Naturally, I was standing with my mouth open unable to speak.  No one had ever explained this to me before.  It happens to me all the time.  I thought it was because I didn't have a clue what I was doing.  Suddenly I realized .... I am not alone in this situation ... every artist goes through the same process.  I can handle this!
"I think this is a great beginning ... you are absolutely on the right path here ... we can continue."  Once again, I was stunned.  We painted some additional shapes over my drawings.  Especially at the top, where the shapes got smaller, which will give the painting perspective and the feel that the houses are farther away.  That made sense.  We finished that, now I am working on the original drawings of the houses underneath the shapes.  You can see I have begun on the bottom right hand side of the painting to give the building more definition.  My homework is to continue - go out on my terrace and have another look if necessary, and simply carry on.  I'm enthused now.  I thought this piece was going in the garbage.  It has given me hope.  I will continue to work on it until Tuesday, and see what happens.  I am having fun.  Nina is a very good teacher!
Now for a little more history of Mexico.

The Spanish Conquest
From the time of Hernando Cortez's conquest in 1519 until 1821, Mexico was a colony of Spain. With fewer than 200 soldiers and a few horses, the initial conquest of the Aztecs was possible only with the assistance of the large Indian armies Cortez assembled from among the Aztecs' enemies. After a brief initial success at Tenochtitlan,(now Mexico City) the Spanish were driven from the city but returned in 1521 to destroy the city and to overwhelm the Aztecs. Within a short time the rest of central and southern Mexico and much of Central America were conquered from Mexico City.
The Spanish usurped the Indian lands and redistributed them among themselves, first as encomiendas, a system of tribute grants, and later as haciendas, or land grants. During the early contact with Indians, millions died from such European diseases as measles and smallpox, for which the natives had no immunity. Central Mexico did not regain its pre-Columbian population numbers until perhaps 1900.
Meanwhile, the Peninsular War (The Iberian peninsula) was going on in Europe. (This was basically part of the Napoleonic wars, involving Spain, France, Britain and Portugal)   The "guerrilla" warfare carried out by irregular Spanish forces added a new term to the military vocabulary and served as a model for future insurgencies. Because of this war, Spain was in desperate need of money.  The coffers of Mexico were drained (including the rich pockets of the Catholic Church) to support the military efforts in Europe.  Mexico became poor, desperate, hungry and even more oppressed under Spanish rule.  This was a huge instigator for the War of Independence which began in 1810.

"The painting leads the painter, and it becomes an intuitive experience."  ~ Ardith Davies
Posted by Unknown at 10:04 PM