* A Better Chair and a Little History 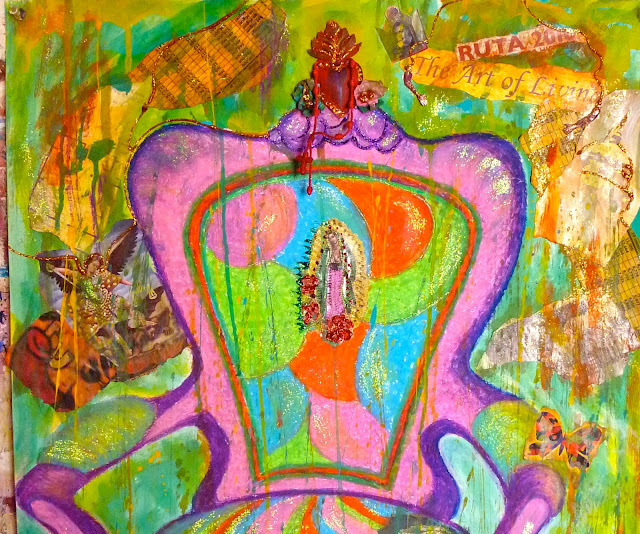 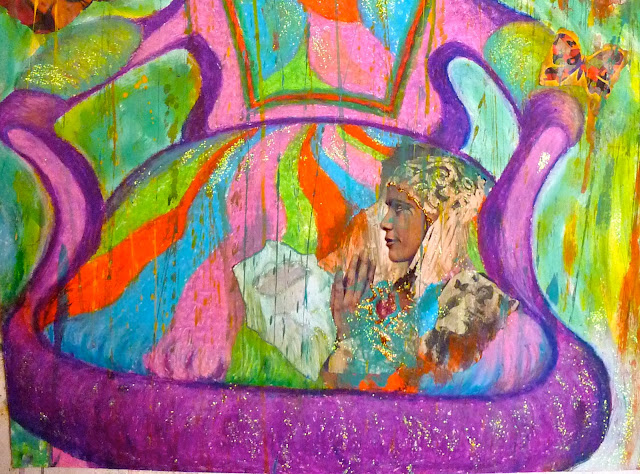 Detail of Chair Bottom
Can you see the difference?  Today I learned how to add volume and form.  Which I already knew from drawing the body, but had completely forgotten.  I spent another 2 hours on the chair at Art Class with Nina.  She also helped me integrate the collage into the piece which was very helpful.  I added a ton of glitz.  You can't really tell in the photographs.  I'm not sure if I like it or not.  I like the chair .... it's the glitz I question.  When I said to Nina I thought the chair was funky, she said, "No, that chair is Royal."  And so endeth the lesson.  Back on Thursday for another.  My homework for Thursday is to draw an abstract design, perhaps by throwing the stones, then draw a more realistic image on top of that ....... and somehow integrate the two!  Sounds like a challenge to me!!
Now, would you like to know a little more about Mexico?  I love history.  Find it fascinating.  While I'm here, I've decided to learn a little more about this country.  I'm going to share it with you ... a little bit .... then another little bit.  Don't panic!  I won't overwhelm you.  If you don't like to dig into the cultural fabric of a country ... we will see you tomorrow.
The Spanish arrived in Mexico in 1519.

Prior to that, a large number of Indian groups lived in this beautiful country.  They were all very diversified with completely different social and economic systems in place.

Smaller tribes in the arid north were generally hunters and gatherers.  They were nomadic.  You may hear them referred to as Chichimecs.

In the rest of the country, agriculture prevailed.  This allowed large populations to be supported.  Among these were the Maya of the Yucatan penninsula.  Other tribes included Tolonac, Huastec, Otomi, Mixtecx, Zapotecs, Tlaxcalans, Tarascans and Aztecs.  Examples of highly developed civilizations are the Myan city of Chichen Itza, and the Aztec capital of Tenochtitlan.

When the Spanish arrived in central Mexico, the Aztecs controlled most of the Mesa Central. The city of Tenochtitlan was established in the early 1300's where Mexico City is situated today. It became the capital of their empire. They migrated there from the north fulfilling a tribal prophesy to build where an eagle with a snake in its mouth rested on a cactus.  This became Mexico's national symbol.  Today it's on the flag and is the official seal.  Mexico's name comes from the Aztecs war god, Mexitli. 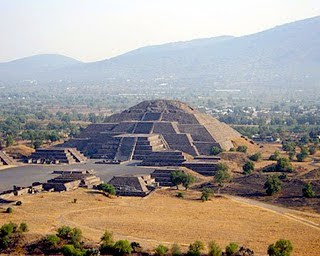 In the photo is the Toltec city of Teotihuacan near Mexico City, established around 1100.  The pyramid of the Sun is situated at one end, facing the smaller pyramid of the moon.  I have been there, years ago.  Super place to prowl around in.  The city would have been highly painted and colourful.  Today, the paint and colour is worn away to the rock face.

So we see well established societies, which warred at times with the tribes around them. (In other words, nothing has changed.)  There were well developed social/economic systems in place.  Who knows what would have happened if, in 1519, Cortez had never arrived. Arrive he did, however.      .... more later

To travel alone is to find the answers you’ve been seeking and discover the questions to all your unfounded thoughts.
Posted by Unknown at 12:41 AM