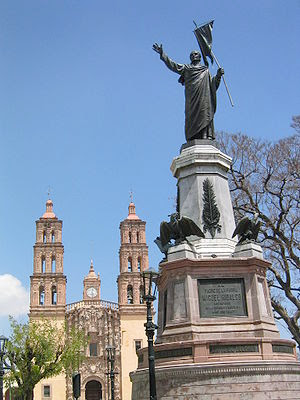 Today, Wendy, May and I drove about an hour to a small colonial town named Delores Hidalgo. It's very famous because it was one of the main points in the beginning of the Mexican Revolution in 1810.  This September, Delores Hidalgo will be a hot spot for those interested in Mexican History who are celebrating it's 200 years of independence.

A little Mexican history for those who are interested.  The city was a small town known simply as Delores when Father Miguel Hidalgo uttered his famous cry for the independence of Mexico there in the early hours of September 16, 1810, in front of his parish church. After Mexico achieved independence, the town was renamed Delores Hidalgo in his honor. On September 28, 1810, Hidalgo's forces killed more than 500 Spaniard and Creole loyalist soldiers during the battle for Dolores.  2,000 Indigenous Mexicans died in the fighting.

The town today is very famous for its tile and ceramic factories.  This industry employs over half the population of Delores.

Needless to day, I had to tie my hands behind my back and hide my money from myself.  I really don't want to bring things home, when I am turning around and coming right back.  The ceramics are gorgeous non the less, and I can see myself putting a lovely 'miss matched' dinner set together.  I was a good girl though.  Nothing came home in my shopping bag! 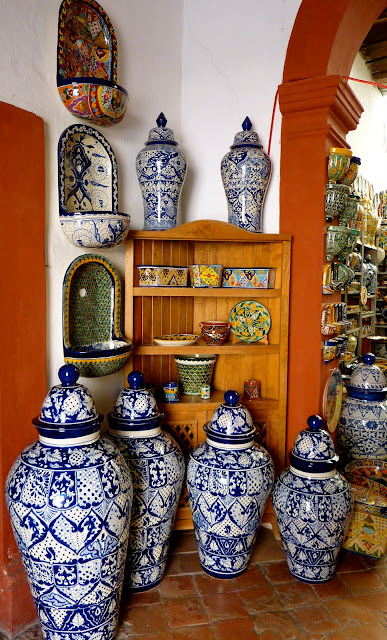 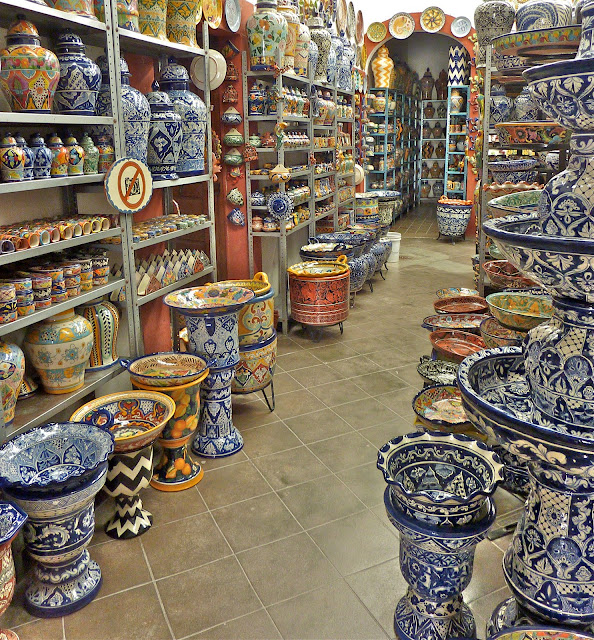 After a couple of hours exploring the ceramic shops it was lunch time.  Between 2:00 pm and 4:00 pm, Mexicans enjoy their large meal of the day.  At 9:00 pm to 10:00 pm or later, they will eat again.  Much lighter this time.   May and Wendy took me to a lovely restaurant.  An old Colonial building, where we ate in the huge opening amongst the arches.  I would imagine this is where the horses and carriages would have entered the property in the 'old' days. 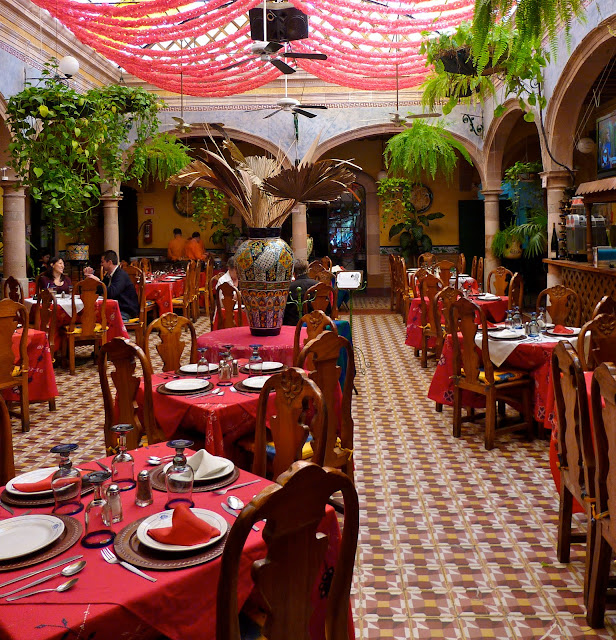 When we arrived, the place was empty since we were 'early'.  The buffet of Mexican delights was not ready.  We settled down at our table for a lovely chat and a cool Mexican drink.  The waiter came and moved our shopping bags off the floor and onto a hanger by our table.  It is bad luck to leave your bags on the floor.

While we lunched, one of May and Wendy's favorite Mexican singers took the stage.  His name is Jorge - pronounced 'Horhay' .... or horsehair as my girlfriend laughingly insists on calling him!! (She's naughty) Jorge is George in English.  Wendy and May freely admit they are 'groupies' and have all his CD's.  When he began to sing, I could see why.  I sat there mesmerised by his beautiful mellow voice coupled with his skill on the Spanish guitar.  Wendy translated the words in my ear, and I swooned.  We, of the Anglo/Canadian persuasion, have no idea how to write words like that.  I came home with one of Jorge's CD's. 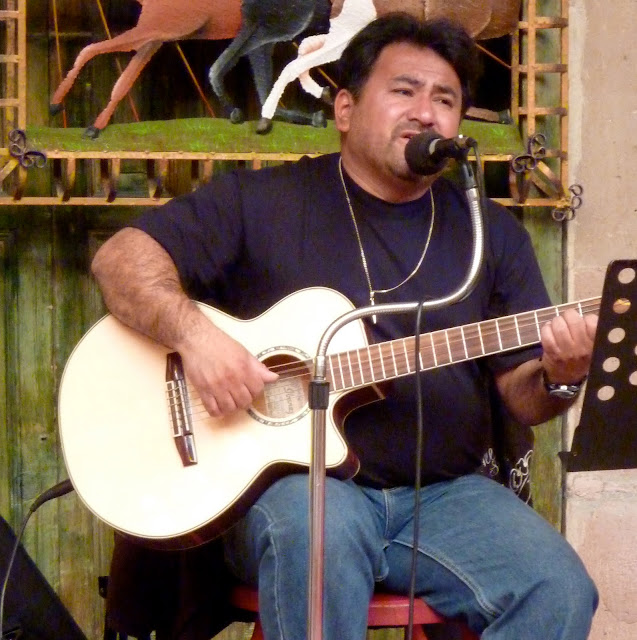 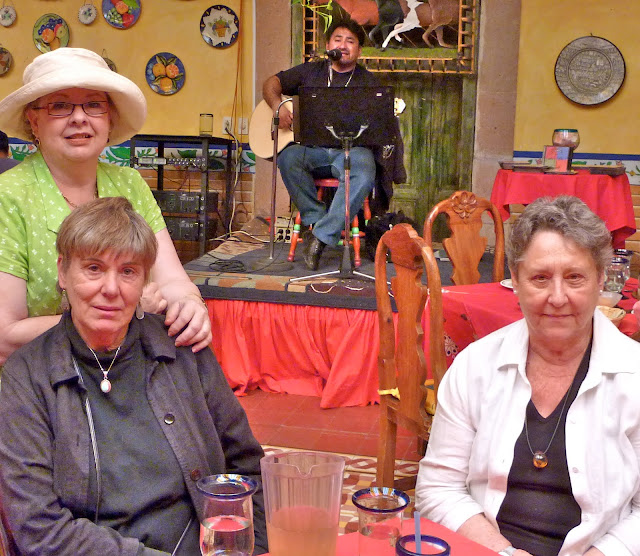 We drove back to SMA, happy, content and in a calm reflective mood after listening to all that incredibly romantic Spanish music.  Before Wendy dropped me off, I was taken on a tour of an old colonial home in the centre of SMA where Wendy was dog/house sitting.  I'm sorry to tell you, it is indescribable, so I can't even give you a proper verbal vision.  I would estimate 20,000 sq. ft. (maybe more) including courtyards and gardens.  Outside spaces, inside spaces, spaces which don't connect.  Art, funky art, modern art, crazy art, wonderful art.  I tripped over it, I bumped into it, I was visually overwhelmed by the shear amount of it.  Fruit trees were abundant with harvest in the courtyards.  Oranges, lemons, limes, and fruit I was not familiar with.  Fountains, birds, hidden surprises along the paths.  Everywhere I looked, something visually stimulating.  Upstairs, downstairs, yalapas, open decks, covered decks, water gardens, coi and lily ponds.  Formal areas, casual areas. A guest house. A forty foot long kitchen.  More drawers than I could ever imagine.  Looking for the potatoe peeler?  Go buy one ... it would be quicker .. lol.  A music room.  A library.  Huge trees, palm trees, a tremendous variety of plant material, all native to Mexico.  Viewing this home was an experience, a treat.  Thank you.
So, that was my day.  Wendy dropped me off at the Jardine.  I bought a few groceries at my little shop on the way home, and slowly, slowly, walked up the shallow but consistent slope to my little casa.
Grumpy Marshall Weather Report for San Miguel de Allende, for Monday, January 25, 2010.
"When I stand before the Divine Mother at the end of my life, I would hope that I would not have a single bit of talent left, and I could say, "I used everything you gave me."  ~ Erma Bombeck
Posted by Unknown at 10:07 PM