* Another 'interesting' day in SMA

This place, this time in my life, this adventure, this change for the better, this crawling out of the deep cool dark of the earth to absorb, and indeed to invite the warmth of the sun again continues to leave me just a little breathless.

Today, I met Joanna.  No, I had never met her before.  Joanna invited me to come with her to 'an old door place' after I placed a note on an SMA forum list.  I met her in front of Bonanza (the smallest most fantastic little grocery store in the entire world).  She rolled up in her ford aerostar van, I hopped in, and we continued to chat and laugh like old friends until she dropped me off some 4 hours later.  Joanna and her Mom have renovated two houses.  Joanna is creative, loves junk yards, garage sales, and creating something out of nothing.  I think this could develop into something!

We were going to go to the Tuesday Market, however decided to go to the door place first.  When we arrived at the house, Senor said the "stuff" had been moved to a better location.  Senora came out, hopped in the van with us and off we went down the highway.  Senora chatted away in Spanish, I got some of it, and what I didn't get, Joanna translated.  Senora loves to chat.  My head was spinning.

We arrived at the new location.  Just off the highway.  Much better location for business.  Doors, doors and more doors.  Other great stuff too.  The nicest doors I have seen.  Old colonial doors, four hundred years old.  Old hacienda doors, only two hundred years old.  I won't bore you.  I was over the moon!!!

I found a door.  Rather, two doors which they will put together to make one door.  It will be ready in a couple of days.  It is a new door, only two hundred years old.  From an old hacienda.  The photo I took isn't that great, however it will give you a hint.  When it is hung, it will be awesome.  Take a peek. 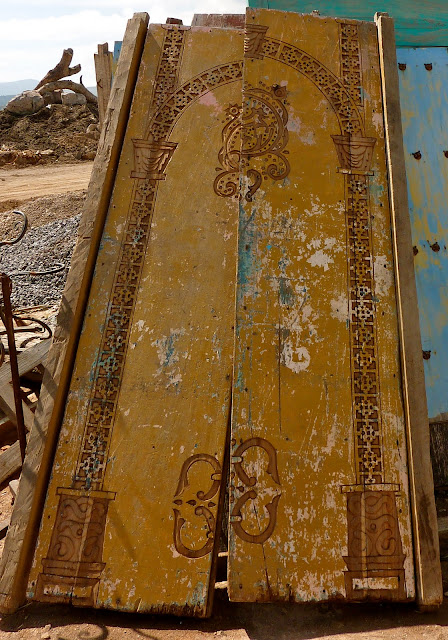 Senora knows my architect, Juan Carlos and is taking care of the measurements, and having it delivered to the house.

Back in the van.  Senora continues to 'chat' directly to me, as if I am able to understand every word she was saying.  Somewhere during the conversation she offeres to take me to Queretaro to shop for the applicances I need for the house.  I was shocked.  I asked Joanna to reply 'perhaps', and tried to change the subject.  The subject, however, was not to be changed. Consequently we are all traveling to Queretaro to shop for my appliances next Friday in Senoras' truck so we can bring them home with us.  I'm still in 'stunned mode' .... no just simply was not the correct answer!  Lucky I packed my Costco card! 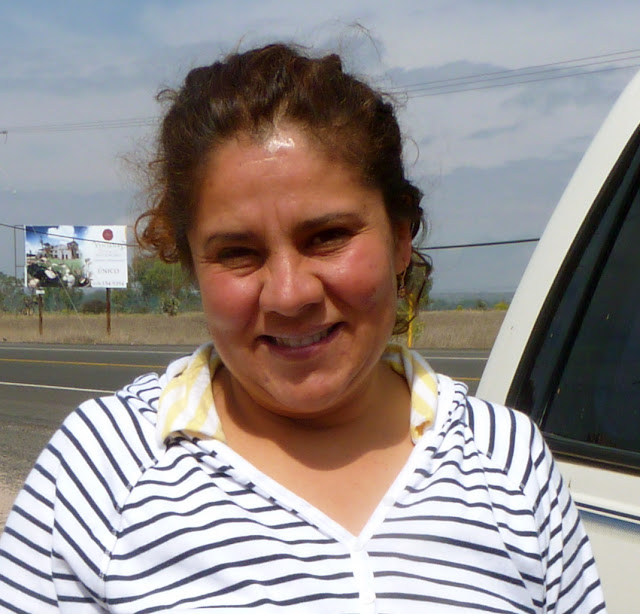 This is Senora.  Many hugs and kisses, a tour of their wonderful house, and we were back on the road.  Decided to skip the market and went straight for lunch.  A little restaurant off the beaten track.  Wonderful food and a young woman selling long stemmed roses.  A dozen for $3.64 Cdn. to be exact!  Obviously we both came home with a bouquet.

Joanna dropped me off and I rushed to change my cloths and walk to art class.  Art class today is another story.  Look what has evolved in my painting!  Lots of work to be done yet. 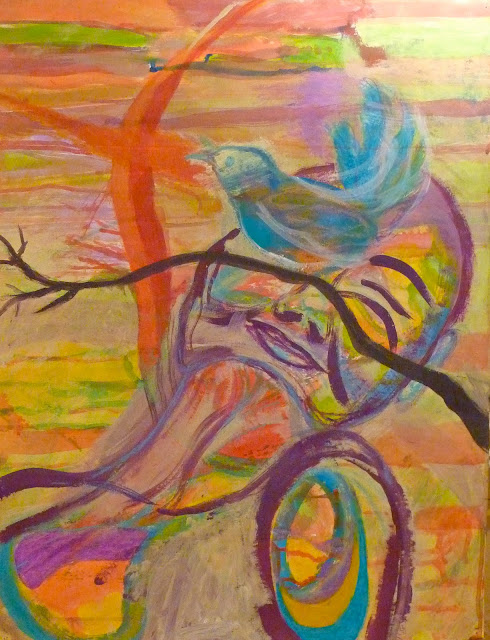 And so, another interesting day draws to a close in SMA.  What else can I say!
Grumpy Marshall Weather Report for San Miguel de Allende for Wednesday, February 17, 2010
Hebrews 13:2:   (Somehow I feel as though it is I who have been entertained by angels unawares.  Everyone has been so kind to me.  They have never met me before.)
"Be not forgetful to entertain strangers for thereby some have entertained angels unawares."
Posted by Unknown at 11:08 PM