I'm learning.  Slowly but surely.  The culture is different here.  That's one of the reasons I moved.  Very interesting learning to understand the nuances, all the subtle bits and pieces.  I have determined that behind every statement, instead of a period (.), there is an ever so silent question mark (?).  You never see it.  It's never expressed by tone of voice.  It's very very quiet and at first I was not aware.  One day however, I began to notice little things.  Statements like "I will be at the house at noon.", were actually "I will be at the house at noon. (silent ?)"   "The box will be here next week. (silent ?)"  "You will have electricity tomorrow. (?)"  "Your house will be finished on Tuesday. (?)"  You get my drift.  Ve-ry in-ter- es-ting, as they used to say in 'Laugh-In'.

And so it is, with some trepidation I inform you I may be able to move into my house by late this week. (?).  All in all it was a good day.  The electrician came.  I have now officially borrowed the neighbours electricity and am paying the entire shot (for both houses) until the electric company is able to come up with a meter for the house.  (?)  ... see???, now I'm doing it!  A step up has been built for my little stove and a brick wall has been built between the fridge and the stove so the heat will not penetrate.  The plumber is coming tomorrow. (?)  The painters are coming to seal the bathroom floor and paint the rest of the walls. (?)  The ceiling fans are installed.  That's a for sure thing ... saw them with my own eyes.  Did not see them going round however.  The bathroom lights have been installed. (ditto about seeing them, but not lit).  I have water.  All the necessities of life.  It's hopeful.  The lovely Sylvia has a smile on her face.  She may have a week of down time before her family arrives from the US.  As I've said before, I'm ever so grateful.  Oh, and guess what else.  Internet and television cables were installed today and they work!  I actually walked my mac, the Great Queen Catherine, over to try it.  Happy days.

But wait ... it's not paradise yet.  Men will still be working outside every day, all day, until the terrace and the yard are finished.  Quite a bit of work to do there.  I am having the courtyard walls raised by three feet, starting Wednesday. (?)  The roof terrace has to be waterproofed.  etc. etc. etc.  Lots of little things.  I'm hoping the rainy season is about to begin so I don't have to live in so much dust as they are tearing up the back yard and finishing things off.  The rubble is still being removed by hand, by pick axe, and by five gallon pail on the shoulders of young men with muscles.  No gyms needed here.  Hard labour still in effect.

This past Saturday, Sylvia and I, her maid, Maria and Maria's two daughters went over to Quinta de Luz to see if they could get the cement dust off the floor.  Sylvia and I busied ourselves with organizational duties while Maria and her two girls mopped the floors .... four times I might add before we could see any resemblance of the hand made Mexican tiles.  I honestly have never seen three women who can throw water and a mop around more efficiently and with such style.  There is a knack to mopping tile floors here.  A tradition I have never observed before.  Maria informed me the mop I had purchased for her was made for a 'baby', and we promptly went down to the little store on my street to buy a descent mop which was up to her caliber!  Buckets were filled with water - mops splashed in and splashed out flooding the floor.  Mops were then squeezed dry and the water mopped up again.  This happened four times as I said.  At last, I was able to see the glimmer of tile through the cement dust.  I honestly wasn't sure it was going to come off.  When the water became too dirty to continue the pails were emptied with a flourish into the driveway or onto the terrace where it could do some good to clean that area.  Amazing! Frankly, I was very happy to be on organizational and unpacking duty.  It was hard work.

Quinta de Luz and I are definitely getting closer together.  Here are some of the photos I took this week. 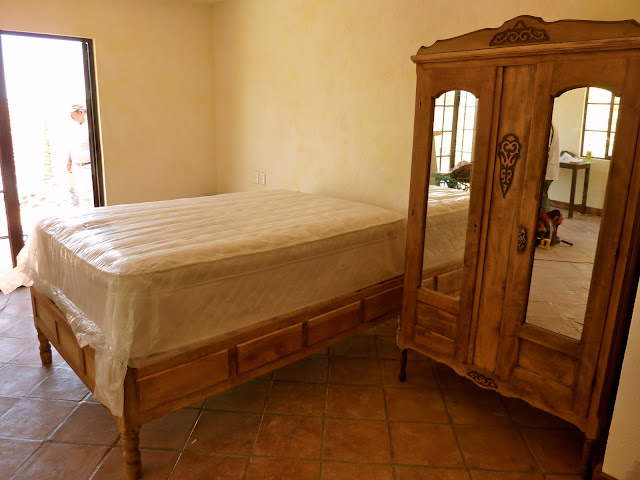 My Serta Mattress arrived for # 3/8.  It's high.  We will both have to take a running jump at it, and I will have to have stairs built for Habibi.  Notice the four drawers however!  Another four on the other side.   Storage. 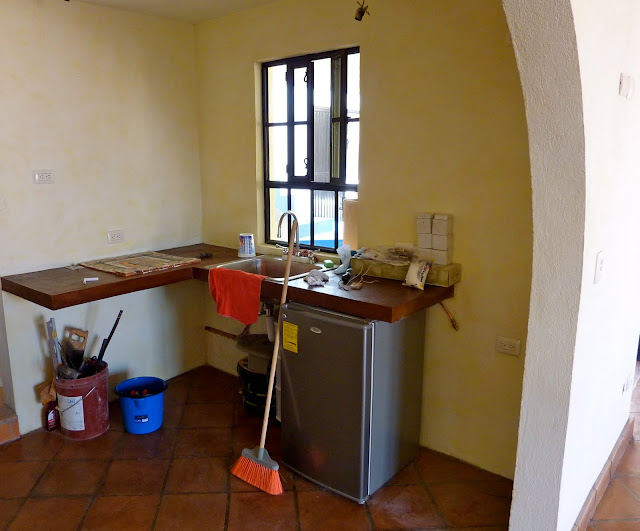 My tiny, under the counter, whirlpool fridge has been installed. 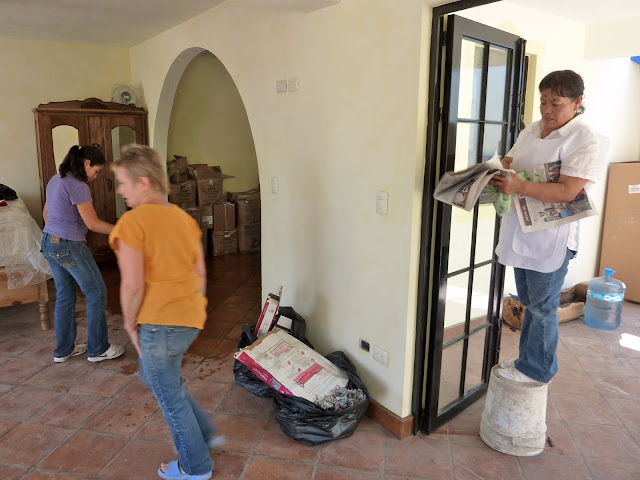 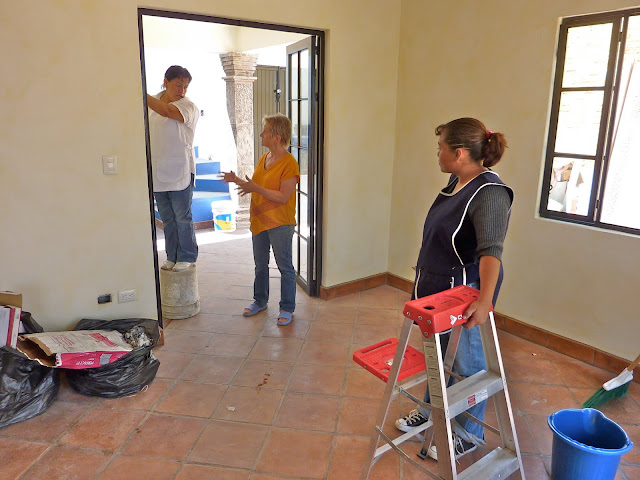 Mopping and cleaning.  Didn't get a good shot of the mopping techniques.  Later. 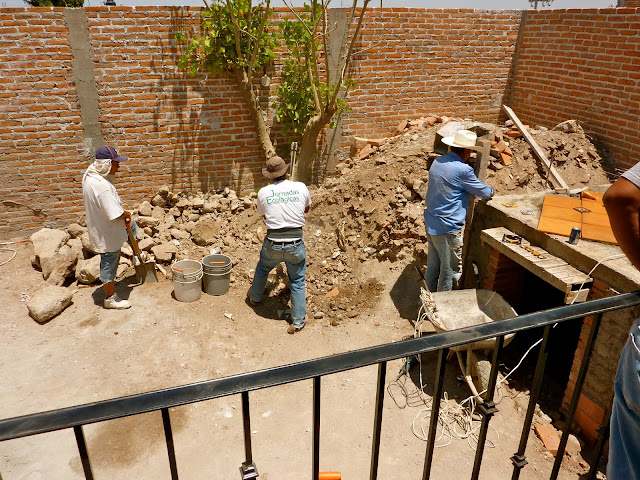 Taking the rubble away, one bucket at a time. 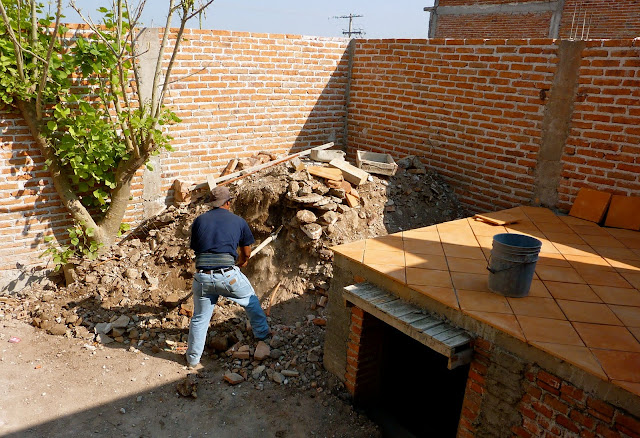 I knew that pile was getting smaller.  Pick axing the hardened stuff.
"A dream is your creative vision for your life in the future. A goal is what specifically you intend to make happen. Dreams and goals should be just out of your present reach but not out of sight. Dreams and goals are coming attractions in your life."  --Joseph Campbell
Posted by Unknown at 7:31 PM