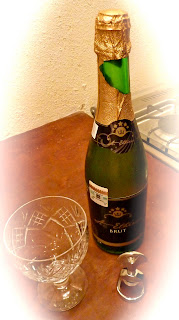 I have begun a research project.  I need to find the best reasonably priced champagne available.  Sometimes a girl just needs her bubbly.  It actually settles my stomach.  Better than gingerale.  Yes, really!  The other day, I spotted some C for 85 pesos.  That works out to $6.91 cdn.  What better place to start than at the bottom of the price scale.  I purchased a bottle.  Almost forgot I had it, until last night I spied it in the door of the fridge.  I brought four Marie Antoinette's for the occasion.  I was beginning to look forward to the first sip.  Even brought my champagne sealer in order to save the bubbles so I didn't have to drink the entire bottle.

The cork popped.  Not the usual great sound of a cork popping under pressure and flying through the air.  No bubbles or fog rose from the bottle neck.  At this point, I'm still trying to be optimistic.  I poured.  No bubbles on top.  Not many rising, and the ones that were rising were huge. 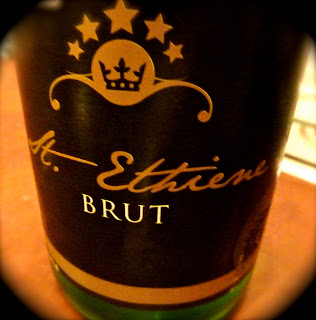 I gingerly took my first sip.  Tried to be very broad minded, after all the price was very very right!  The taste?  Let's just put it this way.  I only had one glass.  Does that tell you anything?  I recorked the rest and stored it.  My first experiment didn't work for me.  It was pretty tasteless.  It was pretty flat.  At least it was dry.  I'm crossing St. Ethiene off my list.  Moving on up the price ladder to the next most inexpensive bottle of bubbly.  I'll keep you posted.

Does Champagne and champagne glasses interest you?  After owning and drinking from both flutes and Marie Antoinettes, I find I much prefer a Marie.  So much easier to hold.  They never fight for position with your breasts.  A long stemmed flute may, depending on how your are sitting, or lying.  Before I left Canada I abandoned my gorgeous flutes and hunted down four antique, hand cut Maries.  They survived the journey.  The history of Champagne and Marie Antoinettes follows.  I find it fascinating.

France in the 1700’s was ruled by Marie Antoinette, the original “material girl.” When she wasn’t frolicking in the bucolic gardens of Versailles, she was hosting all sorts of soirees that featured fabulous food, entertainment and wine.

Perhaps it was during one of those fetes that she decided to combine her love of herself and her love of a good party and came up with the idea of casting a wax mold of her breasts. This she had made into a glass, and “Viola!” – the champagne glass was formed.

The bubbly beverage had its beginnings in France in the La Champagne region, which has long produced grapes from coveted vineyards. Quite by accident, champagne was discovered when casks of wine were shipped out from France and the warm weather set off a secondary fermentation during the journey. In the late 1600s, Dom Pierre Pérignon worked at his abbey to deliberately produce champagne, and is said to have exclaimed, “Oh, come quickly: I am drinking the stars!” when referring to the fruits of his labor.

Over the years, changes were made to the manufacturing process, and several well-known “champagne houses” were established; among them Moet, Bollinger, Mumm and Perrier.

By the mid-nineteenth century, 20 million bottles of champagne were being sold – an enormous increase since the turn of the century when sales only reached 300,000.

But the tides turned for champagne when WWI began in earnest, and a German invasion into the region led to the use of the enormous caves beneath Reims being used as shelters from the bombardments of military weaponry. The city had to be rebuilt after the war, and a considerable source of revenue evaporated when Imperial Russia no longer existed as a major purchaser of the beverage. Then the Great Depression and Prohibition hit the United States, and the champagne industry suffered even greater losses.

After WWII, however, things began to improve. In the years between 1945 and 1966, the world saw plenty of reasons to celebrate, and at those festivities champagne was included. No longer considered a pleasure of the wealthy, everyone now had the opportunity to indulge in the sparkling effervescence.

Today, we’re just as likely to drink champagne from a fluted glass as we might in a juice glass when we’re enjoying a mimosa. But the next time you raise a toast in a traditional champagne glass, consider who’s right there with you enjoying the moment!

Some fun facts from Freixenet:

And did you know?

A tradition that is finding its way into wedding feasts, parties, and formal dinners is that of "beheading" a bottle of champagne with a sabre specially-made for the occasion. Begun as a means of showing off their skill on horseback, the Hussards under Napoleon's command celebrated their victories by 'sabring' off the top of a bottle of champagne. As legend has it, these skilled horsemen would ride on horseback at a full gallop while brave (or foolhardy!) ladies would hold up the bottles. And with over 100 lbs. of pressure per square inch in a bottle of champagne, the sabre has to strike the neck at exactly the right angle.

Nowadays celebrants can purchase decorative replicas of these sabres that have been faithfully recreated by artisans in Thiers, France - the French capital of cutlery.

**When serving a sparkling wine, refrigerate it for 30 minutes before serving. A standard 750 ml bottle yields 5 to 6 glasses.**
Three be the things I shall never attain:
Envy, content, and sufficient champagne.
Dorothy Parker
Posted by Unknown at 11:27 AM