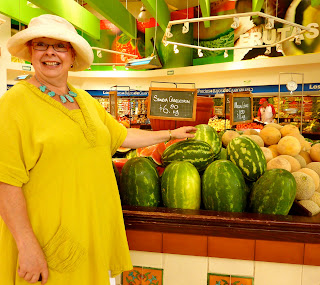 23 cents a lb.  Not bad compared with what I was paying in Canada.  I'm a happy camper, as any of you who know me will attest to.  I haven't been eating as much watermelon as in the old days.  The second last summer Papa was alive we went through eighteen huge ones!  We were going for a record the next year, however, he wasn't able to keep up the pace and I couldn't do it all by myself.  I'll be getting back on the wagon in this country.  I love the stuff.  It was a 'Mega' shopping day.  The huge American type grocery store with what is known as the 'gringo isle'.  Everything an American or Canadian might be craving and can't find anywhere else.  Fortunately, I'm not craving anything in that particular isle, and love exploring all the foods new to me. 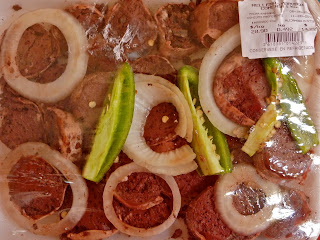 Today we purchased some pork.  It is cut in rounds, and we don't have a clue what it is.  I am doing the cooking of the meat.  Who knows!  I'll keep you posted.

Ah Hah!  Just did a google search.  Thought it looked familiar.  Blood sausage ... good old 'Black Pudding' as I know it from Britain.  Did not know however, it was a dish in Spain as well.   So, it's black pud, onions, and garlic sauteed in olive oil.  Sylvia is cooking the sides.  Yum.

The fans are whirring over at Quinta de Luz.  Circulating air feels so wonderful.  I'm thrilled.  Painters were there and had finished painting the bathroom walls.  Sealing the tiles isnext.  A two day job.  Cement step is drying for under the stove.  Still has to be painted to match the counter.  Dropped off a little more of my start up stock today.  Moving Friday. (?)