The fountain is coming along.  Great skill is being used.  Glad I'm not doing it.  Might be a much different story. 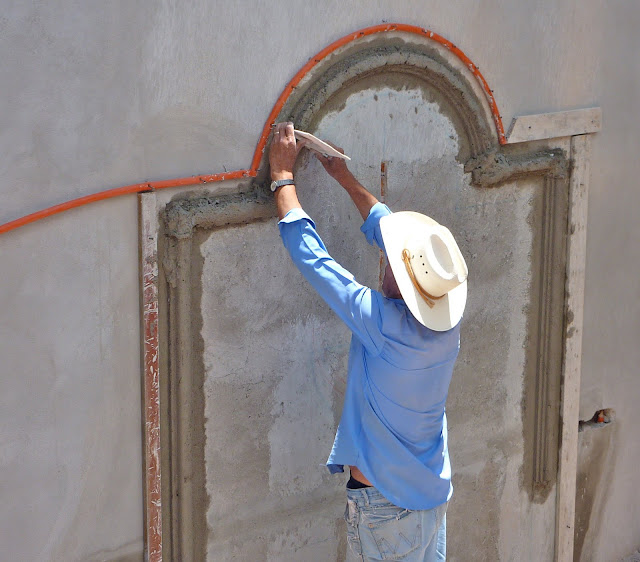 Lupe is forming the 'frame' for the fountain.  It takes many stages.  First the cement is thrown on and skimmed down to size.  Before it gets too dry, or is still too wet, a form us used to make the frame consistent in size all the way around. 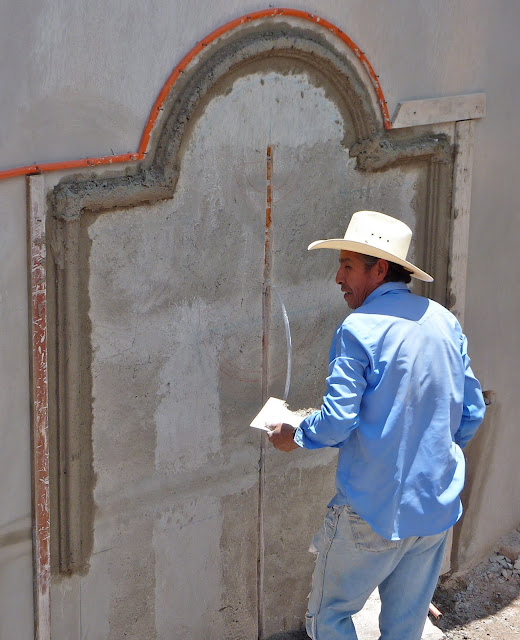 The form itself is hand carved out of a piece of plastic - in the shape of a semi circle.  It is then run over the cement, taking the excess away and leaving a consistent sized rim.  This is the most reasonably priced way to build a fountain.  Cement and tile.  Otherwise I would be having cantera stone.  I'm going to love this every bit as much. 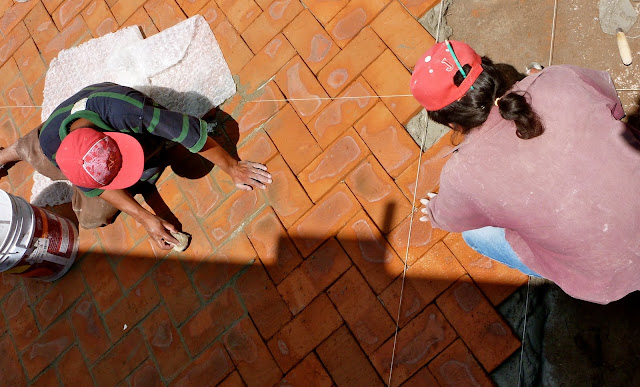 Cementing in the tiles.  Aren't their hands beautiful. 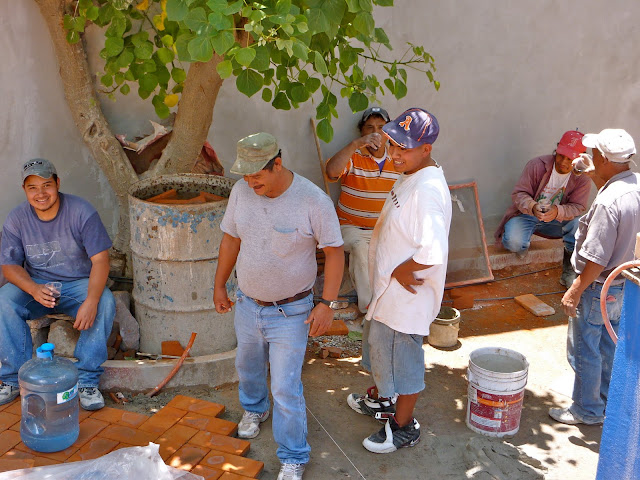 Having a coke break.  Yes, I can't help it, I usually get them a cold drink in the afternoon when it's sooooo hot!

Ah yes!  This is Cesar.  Need I say more.  He has big brown eyes and a great smile.  When he hears the bells ring on the street for garbage, he's the one that comes and gets my garbage and takes in out.  Mexican Charm.  Trouble!
And so another work day draws to a close at Quinta de Luz.  I am arranging for my curtains to be sewn.  Marijo and the seamstress are coming over next Friday to get things moving.  It will make such a difference to have the shelves in the kitchen and bathroom covered.  No matter how much I organize, they are just not pretty!  Soft pure cotton muslin for the living room west windows will be lovely as well.  It will filter the hot afternoon sun and keep the room cooler.
Little by little it's all happening.  I'm tired of living in the chaos, and yet somehow I don't want it to end.  It will be so quiet here and I am now used to such bustle, chatter, laughing, singing, hammering, tapping, water running, buckets of sand and cement rolling by, mixing going on, sweeping, cleaning up --- what will become of me.  Another transition period ... that's what.
"This journey then, is nothing more, yet nothing less than a period of acclimating to a new way of seeing, a time of transition and revelation as it gradually comes upon "that" which remains when there is no self. this is not a journey for those who expect love and bliss, rather, it is for the hardy who have been tried by fire and have come to rest in a tough, immovable trust in "that" which lies beyond the known, beyond the self, beyond union and even beyond love and trust itself."  ~ Bernadette Roberts
I have moments when I feel exactly like this.  I have been tried by fire and  landed.  Rising slowly slowly up out of the ashes like the Phoenix itself I no longer believe in self, but in All That Is.
Posted by Unknown at 2:01 PM