Suddenly at one point during the week I new 'the lovers' are not directly over the high buildings on NY.  They are flying over the water and Manhattan sits behind them.  So I began to play.  In my mind, it is the New York of the sixties, the New York of low buildings along the waterfront.  The New York where the Empire State Building is still the tallest, biggest and best.  It's the New York I sailed from in 1967 to begin my adventures in Europe.  It is my magical New York.  It is the New York songs are made of.  "New York, New York" was one of my our songs when I was married.  A sequence of such serendipitous events occurred around this song for us, and it still brings laughter when I think of it.

So I played with the background for an hour or so before I went to class.  My pallet knife called to me.  The buildings began to appear from my knife.  I'm liking the look.

I really didn't know what I wanted to do with the lovers colour wise, so left that part for class with Nina.  She advised me to use shades of Naples yellow, mixed mauve and just get the shading right on their bodies.  Working on colour later.  That's what I did.  The lights and darks are there now.  What will come as far as colours?  I have a little bit of a clue, however, I will allow my hand and brush to decide.  Here is the latest bit of progress. 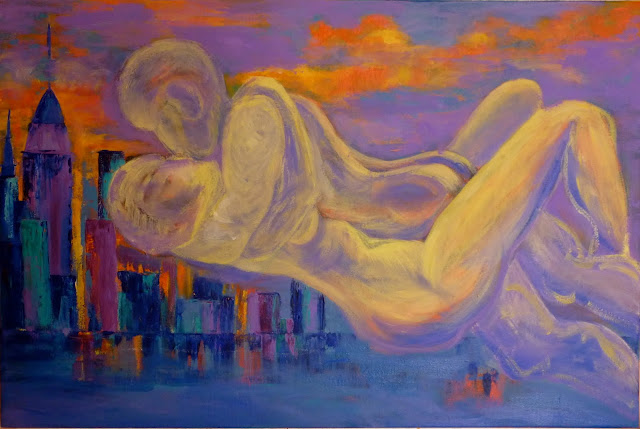 "The creative process is a cocktail of instinct, skill, culture and a highly creative feverishness.  It is not like a drug; it is a particular state when everything happens very quickly, a mixture of consciousness and unconsciousness, of fear and pleasure; it's a little like making love, the physical act of love."  ~ Francis Bacon

PS:  Here's what I think I'm going to do with Ganesh.  I put the original art work back in.  I like the look better ... more balance of intensity.  Still has to be imbeded in wax. 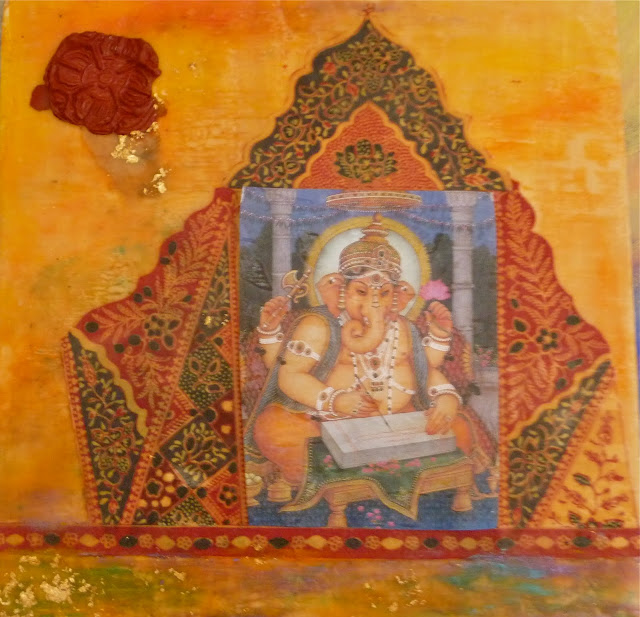