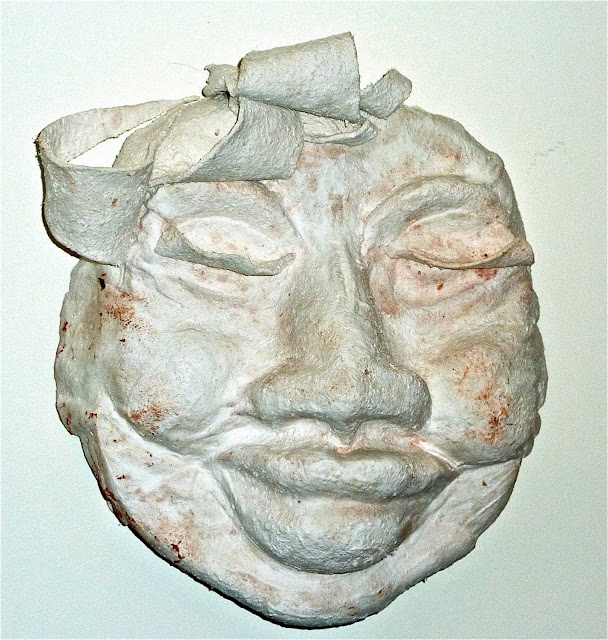 In about 2003, a friend of mine invited me over for an evening of sculpting and making a mask from what we had sculpted.  Sounded like fun to me.  I had never sculpted anything before.  I was nervous.  What if nothing comes out?  What if I can't make that lump of clay look like anything.  After all, I was in the presence of a 'real' artist.  She had sculpted my Father's bust for Strathcona County.  I had that 'less than' feeling in my gut.

We kneaded the clay.  The feeling of the clay in my hands was earthy, sensuous.  Like making bread.  The rhythm of kneading the doe.  "What are your going to make?", I asked.  "A native Indian with a head dress.", came the reply.  More 'less than' came up in my throat.  We turned on the music.  We began to sing.  I began to move to the music.  Suddenly a face began to form.  Honestly, I had nothing to do with it.  I was not making it happen.  I squealed with glee.  The more she appeared, the more astonished I became.  At one point, near the end of her surprise entrance into the world from 'creative heaven', I screamed, "It's Mama Moon!"  Obviously, she was African.  She was Black.  I knew she was not from America.  I knew she came somewhere from the continent of Africa.  I also knew she represented the Moon, in all her glory.  I was stunned.

I have carted Mama Moon everywhere I have gone since that time in my life.  She has traveled well.  Not a crack or break in her.  I wish I could remember the recipe we used to make the mask!  I always knew I would do something with her.

I dug her out of her box the other day and began thinking about what to do.  It's been a difficult transition from gray to colour.  I know she is an African Moon Woman.  I also know her face is not black, or brown or any shade thereof.  She is harvest moon, dripping with that bronze gold colour as she appears over the horizon.  Being African, she is in love with bright colours and loves hats on Sundays.  Don't forget my dilemma though - she is still "Mama Moon", looking down upon us in all her celestial glory.

Here's what has happened so far.  I'm letting her tell me what she wants - and I think it's coming along in the right direction.  She is a harvest moon.  Still likes to wear her hat. 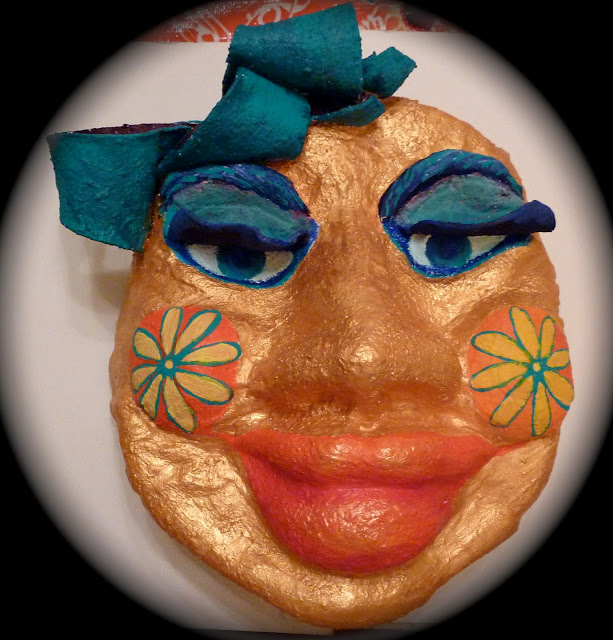 Don't know what will happen next.  I think perhaps she needs earrings.  I'll post the final result.
Off to bed.  My computer was down for a couple of days.  That was no fun.  Felt very disconnected.  It's back, so all is well.
“The creative process is a process of surrender, not control.”  ~ Julia Cameron
Posted by Unknown at 7:32 PM