In Canada there is a lot of big machinery on building sights.  I never heard one motor as this house was being built.  If we asked someone to come and dig us a hole for a tree north of the border, expectations would dictate a back hoe.  If they knew it was solid rock they would be breaking through, at least a lowly jack hammer would be in order.

This is Felix.  He is a lovely, gentle young man with a wife and four children.  He's a good worker, and works hard.  He speaks English, because as an orphan is was adopted into a 'gringo' home.  A few days ago, he and his wife came to clean my studio after the construction, and help me move some of my 'stash' upstairs.  They did a wonderful job.  I had also asked Felix to begin digging a hole in my jardin where I could place good soil to plant a tree.  Little did I know, about three inches below the surface was solid bedrock.  He chipped the first few inches out with a pick axe.  He then explained he would come back tomorrow with a 'tool' which would be able to deal with the rock.  Somehow in my brain I envisioned a 'tool' with a plug on the end. (silly me)  Felix showed up at 8:00 the next morning with something which looked very Medieval.  A very long, solid iron pole, taller than himself, with a wicked, pointed, sharp end on it.  There was no plug in sight.  I watched him pounding that pole into the rock time after time.  Such a repetitive primal movement.  The rhythmic pounding stirred something very primitive deep inside me.  It was comforting, it was basic, it was 'the old ways'.   It took him three hours of hard labour.  The hole is not finished.  It will probably take him another three hours to dig down deep enough for a tree to survive.  He is happy to have the work.  He is proud he was able to get through the rock.  It pleases him that I am happy with his work.  Life is so different here. 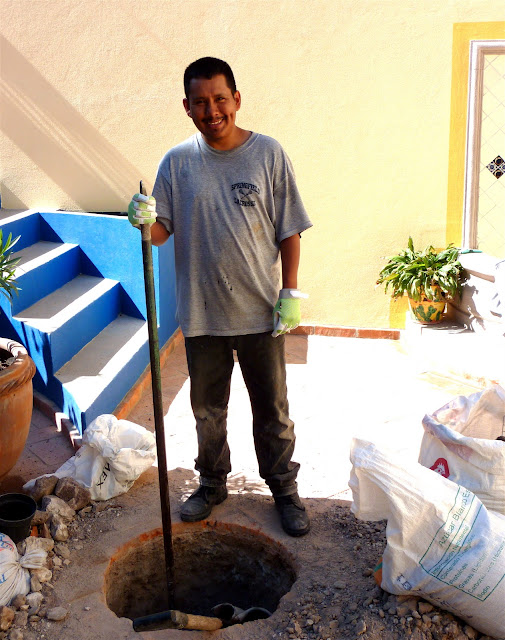 Finally, it may be said that by living in a foreign country, people are able to establish a greater understanding between nations. That is to say, by working and living among foreigners, some of the barriers between countries can be broken down, helping to create a more peaceful world. Needless to say, better diplomatic relations would be of benefit for all.  (excerpt from an article on leaving your homeland for a foreign country by  Cristina Nuta)
Posted by Unknown at 12:20 AM