I'm going to have to take a little break from creating whatever it is I've been creating.  Some of you know this year for me has been horrendous.  I was actually doing very well until about two months ago when things began going awry after I had already gone well past my limits in the awry department.

Then a couple of weeks ago ... well let's just say, I need to get my balance back.  Even my creative spirit has been brought to a hault, however, this evening I did do an art journal spread which I am going to share with you.  This is exactly how I feel.  Don't ask me to explain.  Please accept.  I would be in big trouble if I ever tried to explain this publicly.  Also, please know, I am in absolutely no physical danger. 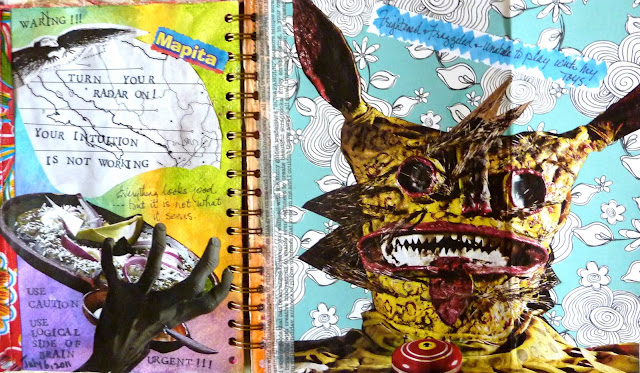 So, having said all that, I would like to somehow keep you amused.  As you know, I have been digging through my old writing.  Even in the late 60's, young North American women were a novelty in Europe.  I was pursued.  Believe me, I know, I was there.  This is a piece from that time in Europe (Palarmo, Italy), in 1967.  I hope you enjoy it. 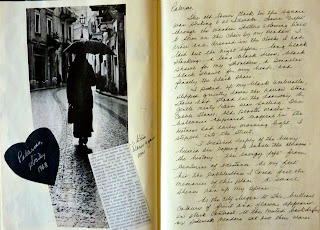 "The old tower clock in the square was striking 6:00 am as I awoke.  Dawn crept through the wooden shutters allowing lines to form on the chair by my window.  I arose and dressed in the clothes I had laid out the night before.  A pair of long black stockings, a long black dress, a black shawl for my shoulders, a smaller black shawl for my head, and finally a pair of fine black leather shoes.

I picked up my black umbrella. Slipping quietly down the narrow stone stairs I stood in the doorway.  A gentle misty rain was falling.  The cobblestones, old plaster walls and balconies appeared magical in the wetness and early morning light.  I stepped into the street.

The heavy humid air filled my lungs as I took a deep, deliberate breath, hoping to inhale the oldness, the history, the energy left from centuries of existence.  As my feet touched the cobble stones I could feel the memories of this place.  A small shiver ran up my spine.

The city was coming to life as I strolled the narrow streets.  Brilliant colours of fruit and flowers appeared in market stalls in stark contrast to the beautiful muted backdrops of the streets and buildings.  Two small boys, eager to get a head start on life, darted in front of me pursuing their soccer ball.  Vendors were busy stocking their stalls to display the daily wares.

No one paid me any mind.  Visually, in my blackness, I had become ordinary.  I could now be the observer, instead of the observed.

The streets became narrower, and as the city around me awoke, it began to stretch and move.  I could hear the sounds of footsteps, lively chatter and laughter.  Nearby a church bell rang, and donkeys with baskets loaded on their backs climbed the hill ahead of me.  Above me, a women hung her washing out to dry on her ornate balcony.  Twittering song birds in their cages appeared as their owners hung them on the outside walls for the day.  The smell of fresh baked bread, Italian coffee, fresh fruit and goats cheese permiated the air.  A man peddled past me - his baskets loaded with ripe tomatoes.

As the day wore on, old men sat at tables in the street and gossiped over bread, cheese, olives and red wine.  Women, sitting in a row facing the wall, busied their hands with traditional needle work, and chatted about the local goings on.

I stopped still.  I closed my eyes.  I breathed deeply.  I became one with the essence of my surroundings and quietly imprinted the scene in my heart for future reference.

As I crested the hill, the mist began to lift and the sun peaked through.  My umbrella became my walking stick.  Before me lay the Tyrrhenian Sea -- the bluest blue I had ever seen.  My heart raced.  My step quickened.

The fishing boats had left for the day.  The bay was quiet.  As I neared the small beach, the rhythm of the waves tugged at my soul.  In my blackness I was invisible - the sea and I could have our privacy.  We would spend a wonderful day together.  I was home!"

"Certainly, travel is more than the seeing of sights; it is a change that goes on, deep and permanent, in the ideas of living."  ~ Miriam Beard
Posted by Unknown at 11:14 PM