Finally, I got all the bits and pieces together from my erosion bundle, had a good look at it, and decided it was time.  Time to either chuck it, or do something.  After some thought, and sorting through the pile, I did come up with an idea and began the project today.  I should be finished by next week, so I'll keep you in suspense until then. :o)

My Elizabethan Lady and I are somewhat at odds with each other.  It's sort of crazy making trying to paint or draw people without a model.  I'm not sure why I do it.  Sometimes, I'm nearly driven to distraction, trying to figure out how much of their hair I would see from this angle, how much of the side of their face would show and how much would disappear on the other side.  Like I said, it can drive me a little loonie.  (don't say it!)

She's going to have jewels in her hair.  I have moved them umpteen times, and now her head is getting poka dots.  Also having a challenge with her eyes.  It's the angle her head is at .. and I know her left eye is -- well let's just say it's wonky.  I know if Nina saw her she would say she doesn't look real.  WELL, I don't particularly want her to look real.  I like those big black unreal looking eyes, thank you very much.  So, I shall keep trying, experimenting, playing and hopefully she will end up on the wall, not in the bin. 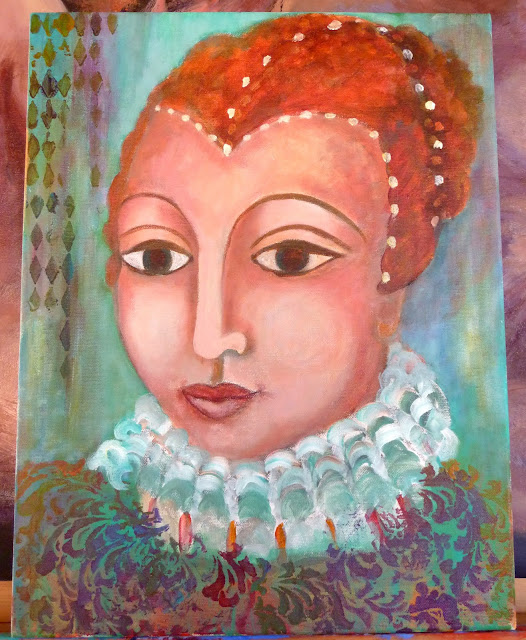 Lenna commented that she liked the pattern of her dress.  Secret:  It's a stencil.  Sort of a huge flourish.  I thought it would be fun to try and make her dress.  Her right shoulder needs to be lifted just a tad, however, I like it and using different colours of paints as I moved the portion of the stencil I was using was fun.  One has to keep ones creative life interesting!
So, my lovelies, hope you had a great week.  The weekend is upon us.  May it be a wonderful relaxing time for all of us.  Take care, and again, I so love it when you drop in.  xxoo
Try a thing you haven’t done three times. Once, to get over the fear of doing it. Twice, to learn how to do it. And a third time, to figure out whether you like it or not.  ~ Virgil Garnett Thomson
Posted by Unknown at 10:52 PM