Had errands to run this morning.  I'm certainly not back up to speed.  It wore me out, which is really annoying.  Got home, had a nap.  Habibi did the same ... it's hard work staying home waiting for Mommy!

Later I wandered up to the studio and spent some time with Medicine Woman.  The more time I spend with her, the more grounded she becomes on the canvas, the more I can feel her ancient energy.  She speaks to me in ways I can't explain in words.  She has led me to the story of Bridgid, the Celtic Goddess.  Who am I to question.   I'm not finished yet, however, when I am, I will tell you the entire story.

Here's what happened today.  Probably one more day of work will complete her. 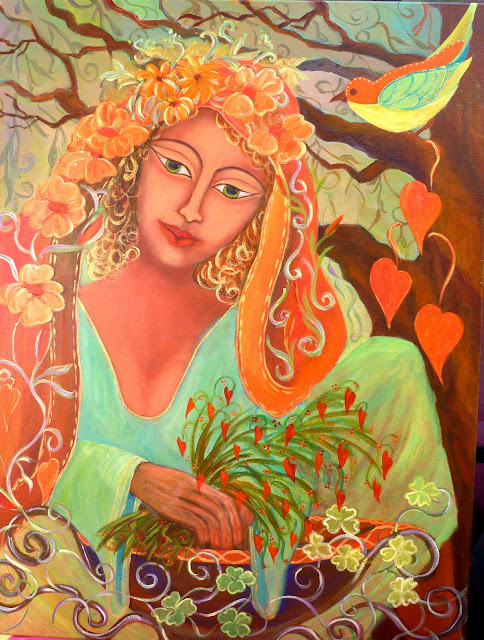 I was poised, paintbrush in hand, to paint a bouquet of herbs in her hands when suddenly I heard the word 'heartlets'.  "Heartlets?"  I was baffled.  "A bouquet of small hearts.  After all, love is the greatest healer.  How do you expect me to make my potions and medicine bundles without adding love?"  I painted heartlets.  I also began to paint the shamrocks with three leaves.  It was part of why they were coveted by the Celts.  Again I heard "A shamrock with four.  You have no idea the power they contain and impart to those who hold them.  Yes, I want shamrocks with four."  And so it is.  Shamrocks with four and heartlets.
Tomorrow I may be able to complete her and tell you the rest of the story.  Until then ... thank you for stopping by.  Take care and let's see how creative we can really be.  ha ha.  xxoo  Donna
Celtic beliefs.   "Women were highly honored, female symbolism formed the most sacred images in the religious cosmos, and the relationship with motherhood was the central elements of the social fabric the society was held together by common allegiance to the customs of the tribe loosely organized around the traditions of the goddess"
Posted by Unknown at 10:04 PM