My journey with Medicine Woman has been an interesting one.  Actually, I would apply the same statement to all the women who have come through me to my canvas lately.  I am still amazed and in awe at the process.

As you know, this painting, before I even had her on the canvas announced she was Medicine Woman.  As I worked with her she told me she was an 'ancient Celtic healer'.  Doing research I found the definition of the word "ancient" as it relates to Celtic lore would be approximately 450AD.  When I searched the words 'ancient Celtic healer' the first thing which appeared on the screen was The Goddess Brigid.  There was a shrine built to Brigid, near Kildare.  This shrine was built very close to an old Oak tree.  A tree considered so sacred by the Druids no one was allowed to bring a weapon near.  I was unaware of this fact when I painted this figure so close to the large tree.  Brigid is a tri Goddess.  She is a healer, a medicine woman, obtaining her healing properties from Mother Earth.  Known for her hospitality to poets, musicians, and scholars, she is known as the Irish muse of poetry.  She is also considered the Celtic goddess of fire (the forge and the hearth), or what we would know as metal smithing.  It is said that wherever she walked, small flowers and shamrocks would appear.  That was absolutely unknown to me until after I completed the painting.


Later, when Christianity appeared on the scene, St. Patrick dragged this Goddess into the present and endowed her with Sainthood.  I have a sense from working with her essence in this painting, that the Christian Saint has absolutely nothing to do with what the Goddess originally stood for, when women were revered and respected for their knowledge and wisdom, held in high esteem, listened to, heard and honoured.


The other important information I sense from working with her is this.  This painting in and of itself is NOT the Goddess Brigid.  Medicine Woman does however carry her essence and attributes; in other words, everything Brigid believed and stood for.  She has allowed me to bring the very essence of the ancient Celtic wisdom into the 21st century.   The most important message I received while working with her were the words "Love is the Greatest Healer".  Think about that.


During the creative process Medicine Woman specifically asked for the Celtic knot, which symbolizes no beginning/no end thought.  Once energy is created and in place, it can never be un created.  I think physics has proven this.  She asked for hearts and heartlets, telling me she cannot make her potions and medicine bags without love.  Four leaf shamrocks were requested.  Three leaves were not acceptable. They did not hold enough power.  She sits deep in the forest beside a huge tree.  It's my feeling the tree symbolizes strength and everlastingness (is that a word?)  A bird sits near by, symbolizing messages from the Universe and the ability to receive, hear and understand Universal information from another dimension.  It's been a ride, and a most interesting one.  So without further adieu, I give you "Medicine Woman".  I hope you will see and feel under the surface to her very essence, which is pure love. 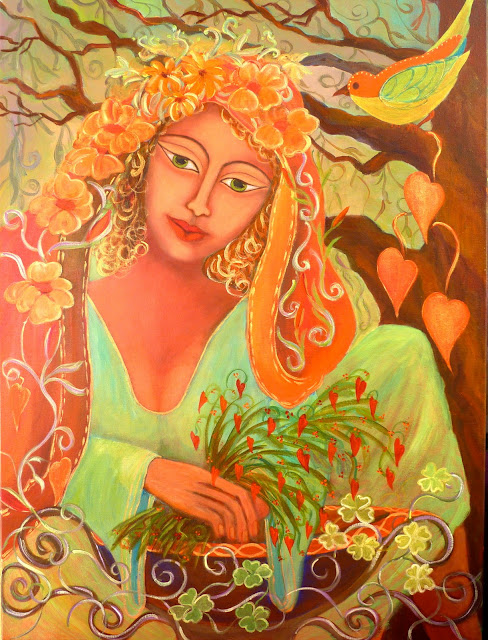 Thank you all for dropping by.  Thank you for listening and understanding.  xxoo  Donna
This is the very first quote I came across when I went looking for an appropriate quotation.  Odd, because I think that, in a nutshell, is exactly what Medicine Woman has come here to say.
“Eventually you will come to understand that love heals everything, and love is all there is.”  Gary Zukav
Posted by Unknown at 11:27 AM