Something finally floated into my head, formed a vague picture and said, let's do this. Sheesh!  I get a bit restless when I don't have a painting on the go.  In no uncertain terms, she told me her name was Freedom.


RESTLESS!  You know those days when you really want to get into something, become engaged and productive, loose track of time.  I open all the drawers, take stuff out that appeals, put it back because I don't know what to do with it, try and sort things out, organize the studio so it works better, soon give up on that (if only I had those big envelopes from Office Depot I could make files), I pace the floor, straightening the cover on the sewing machine.  Finally I pack it in, walk out of the studio, go downstairs, and do the same thing all over again.  That's been me for a little while now.  Thought it was perhaps the effects of the full moon and it could be.

The other day I sat down to make post cards.  Yes, I said to myself, just make a few different ones, photocopy them and keep them on hand.  They'll be nice when you don't have time to write a long letter.  Well, this was the result of that brain wave.  When you are restless and something doesn't turn out to your satisfaction, it seems twice as bad.  Today I attempted Halloween tags.  Huuummmmph!  Into the bin they went.  Who decided purple was a Halloween colour anyway?  May tomorrow be a better day.  :o) 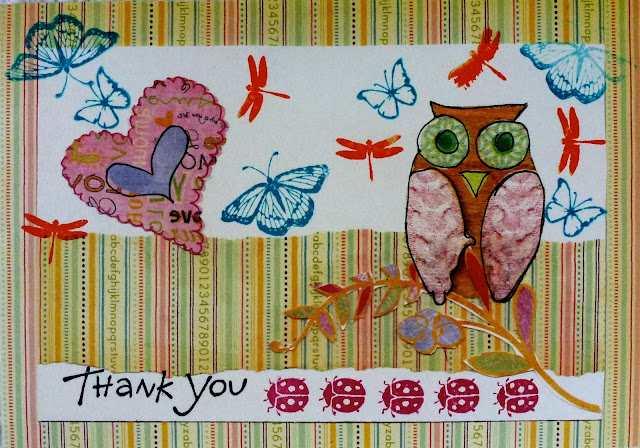 I'm just listening to the theme from Schindler's List.  It breaks my heart every time I listen to it, and somehow it fills me with such joy and love, I can't stop listening to it.  It's the violin.  It speaks to every cell in my body.  It's from a thirty-seven track album called Classical Heartbreakers, all of which I adore.

Well my darlin's, thanks so much for coming by for a visit and leaving your delicious comments.  Art for art's sake!  xoxo  Donna

“My soul is impatient with itself, as with a bothersome child; its restlessness keeps growing and is forever the same. Everything interests me, but nothing holds me. I attend to everything, dreaming all the while. […]. I'm two, and both keep their distance — Siamese twins that aren't attached.”
― Fernando Pessoa, The Book of Disquiet
Posted by Unknown at 8:13 PM