When I used to attend an Ashram located in the Canadian Kootneys, I fell in love with Lord Ganesh, along with Saraswati and Quan Yin. Lord Ganesh, though, touched something deep and I felt very connected to this diety.

Lord Ganesh is known mainly as the Remover of Obstacles, and Lord of New Beginnings. There are many stories of Ganesh, the one I like best is the following,

His parents were Shiva and Parvati. One day while Shiva was bathing and Ganesh was playing beside her, Parvati came in and mistakingly took Ganesh for an intruder and cut off his head. Shiva was in instant grief and instructed Parvati to go and get her son another head. Parvati came back with the head of an elephant, which worked very well. Ganesh loved his sweets and finally one day his rather large tummy popped open. He had to get off his mouse (his vehicle by which he traveled) to get a snake and wrap his stomach so it would close. Now that to me is the story of a diety and I love it. I also love to have Ganesh around and at the moment I could use some help with removing some obstacles and get a head start with new beginning - so I presume that's why he has come to be here now. I finished the painting today. See what you think. 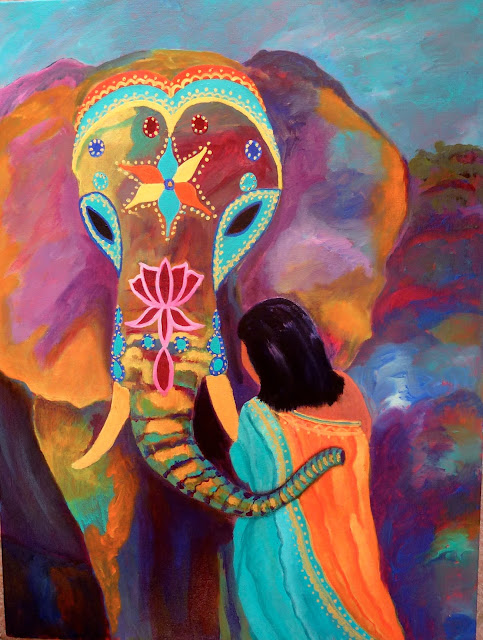 Thanks so much for dropping by.  It's still chilly here, however at least the sun is out this afternoon.

“Just know, when you truly want success, you’ll never give up on it. No matter how bad the situation may get.” - Unknown
Posted by Unknown at 2:36 PM