Greetings my Lovelies.  I'm getting to know some new friends who visit ... how lovely.

In 1992 I was privileged to spend a year on Grand Cayman.  Winter Wonderland indeed!  Of course not a drop of snow, the sea as blue as I have ever seen, and sand so white, when a sandman is built, it vaguely reminds you that snow does exist somewhere on the planet.  They may not have snow at Christmas, however the people of the Cayman Islands certainly know how to celebrate.  It was another very magical time in my life.  The Cayman Islands are still a British Overseas Territory, complete with a Governor.  At the time the Governor's wife took an energetic ride on her white horse, up and down Seven Mile Beach each morning.  It is said the biggest decision the people ever had to make on Cayman Brac (the smallest of the three Islands) was whether or not to wear shoes for an official visit by the Governor.  I like those kinds of big decisions.

The Islands have an interesting a settlement history.  From a Pirate hiding place, to the Irish, to those fleeing the Spanish Inquisition, to Slaves. Many of the little cottages on the Island were built as slave quarters and have since then been restored into gorgeous retreats.  In 2004, Hurricane Ivan made a direct hit, which caused tremendous damage although I believe only two lives were lost.  I know it put a very large insurance company into bankruptcy.  As most of you will know, the Caymans' are a tax free haven and famous for their banking industry.  Once blessed with a huge sea turtle population, they are now almost extinct.  In an attempt to restore the population there is a huge turtle farm where eggs are hatched, grown and returned to the sea.  I was able to hold a sea turtle ... thrill.  Some of the best BBQ ribs I've ever had ... Rum Point.

I fell in love with the small cottages and have attempted to reproduce one in a quick sketch.  They are traditionally painted in pastel colours.  I am linking to Art Journal Journey. 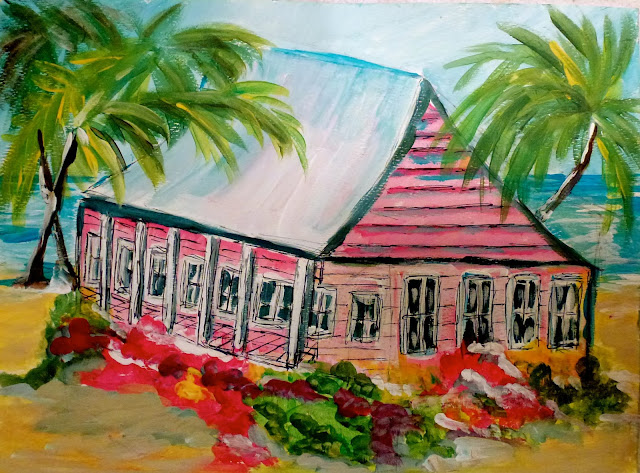 A very unsuccessful attempt to show you the beauty of the cottages.

Thanks so much for dropping by.  It's exiting to read your comments.  Enjoy the moment.

"Medicine Heals the Body, the Ocean Heals the Soul"